Iran‘s President Hassan Rouhani has criticised a US-led naval mission in the Strait of Hormuz, saying Washington’s military build-up in the Gulf was aimed at “creating division and emptying the treasuries” of countries in the region.

Speaking during a cabinet meeting on Wednesday, Rouhani said the Gulf countries could handle their own security and called for unity to do so.

“All talks about establishing a new coalition in the Persian Gulf and Sea of Oman won’t be practical,” Rouhani said, according to the Iranian Student News Agency. “No doubt that it won’t help the security of the region. There is no need for the presence of foreign forces to provide security.”

“The Islamic Republic of Iran is ready to ensure the security of the historical region alongside its littoral states, as it has done so throughout the history,” he added.

The narrow Strait of Hormuz between Oman and Iran has become a flashpoint between the US and Iran in recent months, with Washington accused Tehran in May of sabotaging tankers along the important trade route. Iran denied the allegations.

The US military has since deployed additional forces, including an aircraft carrier and B-52 bombers, to the Middle East as tensions have mounted.

In June, Iran downed a US military surveillance drone in the Gulf with a surface-to-air missile. Iran claimed the drone was in its airspace, while Washington says it was in international skies.

Relations between Iran and the UK have also soured after British authorities seized an Iranian tanker off the coast of Gibraltar in July on suspicion it was shipping oil to Syria in breach of European Union sanctions. Tehran denied the allegation, and said the UK was acting on behalf of the US.

On July 19, Iran seized a British-flagged tanker in the Strait of Hormuz, claiming that it had collided with a fishing boat and violated international law.

Meanwhile, the US announced the creation of the naval coalition to combat “Iranian aggression”, but has since struggled to find European allies, bar the UK.

The friction is rooted in US President Donald Trump‘s decision in May last year to unilaterally withdraw Washington from a landmark nuclear deal signed in 2015 between world powers and Iran. Since then, the US has reinstated sweeping sanctions against Tehran as part of a “maximum pressure” campaign aimed at forcing Iran to renegotiate the agreement.

Last week, the Israeli foreign minister reportedly told colleagues that Israel was offering intelligence and other unspecified aid to the mission

In response, Iranian foreign ministry spokesman Abbas Mousavi said any involvement by Israel in the naval missions would be a “clear threat” that Iran would have the right to confront.

In his first comments on the matter, Rouhani said: “We have a clear response to these efforts; the Israelis had better ensure the security of where they are. They have brought about insecurity, massacre and terror wherever they were present.”

Israel has yet to officially confirm their involvement in the coalition. 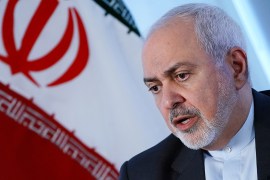 Zarif: US arms sales make Gulf into ‘tinderbox ready to blow up’ 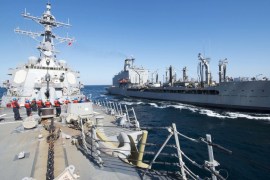