President Cyril Ramaphosa has won the latest round of a legal battle with South Africa‘s anti-corruption watchdog.

A judge on Monday delayed implementation of findings linked to the watchdog’s claim that he misled parliament about a leadership campaign donation.

Public Protector Busisiwe Mkhwebane alleged in July that Ramaphosa had “deliberately misled” Parliament about the $32,500 donation for the 2017 campaign to succeed Jacob Zuma as head of the governing African National Congress (ANC).

She said there was also prima facie evidence of money laundering involving millions of rand in the handling of donations for the campaign.

Ramaphosa called her report flawed, and was granted an interdict by the judge against the implementation of the anti-corruption monitors’s findings while he appeals.

Mkhwebane did not oppose Ramaphosa’s application for an interdict. She has lost several cases in which she has sought to force the implementation of disciplinary action before appeals against her findings were heard.

The case involves complaints made to the watchdog in November by opposition legislators that Ramaphosa had violated the executive ethics code over a donation to his son, Andile, by Gavin Watson, CEO of services company Bosasa.

Ramaphosa had told parliament at that time that the money was obtained legally for services he provided, but he later amended his statement by saying the payment was a donation towards his campaign.

The saga has proven to be cumbersome for Ramaphosa, who has staked his reputation on cleaning up institutionalised corruption and reviving Africa‘s most developed economy, providing ammunition for his opponents – including an ANC faction loyal to Zuma.

The president’s supporters and critics of Mkhwebane say she is acting as a proxy for the pro-Zuma ANC faction.

She denies playing politics and says she is simply holding senior officials to account.

On Thursday, Ramaphosa won a separate a case also involving Mkhwebane when a judge ruled he had acted reasonably in not immediately disciplining Public Enterprises Minister Pravin Gordhan, a political ally of the president, over a decision linked to retirement of a tax official in 2010.

Her office had sought to discipline Gordhan after concluding he had wrongly approved an early retirement package for the official, before allowing him to be re-employed on a contract basis.

Gordhan is appealing those findings, and Ramaphosa now does not need to take action against Gordhan while the case is ongoing. 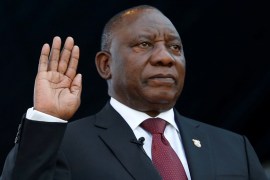 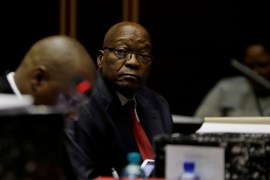 Legal representatives for scandal-plagued former President Jacob Zuma argue he is a victim of ‘mob justice’.