The newly-elected president is seeking a strong mandate for his Servant of the People party to have a shot at delivering on his promise of transforming the war-torn country by tackling pervasive corruption and implementing reforms.

The vote was initially scheduled for October 27, but Zelenskyy dismissed the parliament in his inauguration speech on May 20, calling for a snap poll as he did not have representatives in the legislature.

Without the support of the powerful parliament, the president would not be able to pass any reforms or change the cabinet of ministers he inherited from former President Petro Poroshenko.

In a country seemingly tired of mainstream politicians, Servant of the People has been strategically-packed with inexperienced politicians as it looks to ride the wave of Zelenskyy’s popularity in its bid for an absolute majority in the 450-seat parliament, known as Verkhovna Rada. 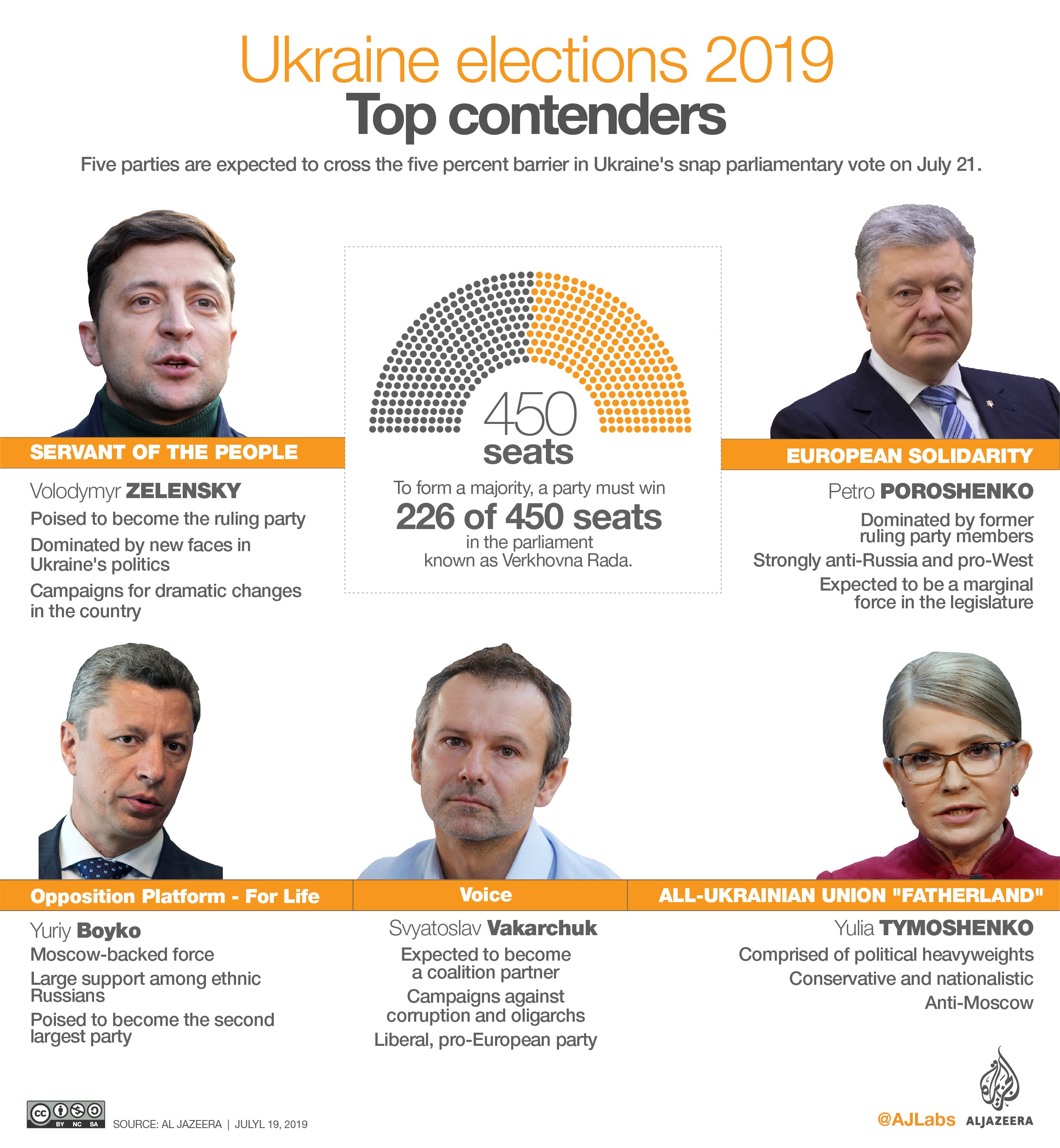 The last opinion polls published on Thursday by the sociological group, Rating, forecasted a 49.5-percent win for Servant of the People, with only four of its rival 21 parties making it past the five percent barrier with minor support.

Opposition Platform – For Life, a Moscow-backed opposition party with large support among Ukraine’s ethnic Russians, was predicted to come second, but with just 10.5 percent of votes.

The rebranded party of former President Poroshenko, European Solidarity, is predicted to drop to a disappointing third place, gaining the support of about 7.7 percent of voters.

The fifth party that is expected to cross the threshold is Voice, a liberal, pro-European party that was recently formed by rock musician Svyatoslav Vakarchuk, with 5.9 percent of votes.

If Servant of the People fails to secure a majority in the legislature, which has the power to veto Zelenskyy’s pick for prime minister, the president will have to form a coalition government.

The pool of potential partners is limited, as Zelenskyy’s supporters would not approve teaming up with the pro-Russia Opposition Platform or the corruption-tainted European Solidarity and Fatherland.

“Both parties have based their appeal on a promise to disavow the ‘corrupt previous regime’, including by recruiting young, inexperienced and often non-political cadres into their ranks,” he told Al Jazeera.

“They have a fighting chance if they don’t get mired in revenge politics and showmanship and instead work on strengthening and expanding the much-needed anti-corruption reforms, begun under their predecessor,” Zalmayev said.

“Both, likewise, risk sinking under their sheer inexperience and incompetence.”

Zelenskyy came to power in April with the support of 73 percent of voters, promising major changes in the corruption-mired country and using his inexperience in politics as an advantage.

The 41-year-old borrowed the image from a corruption-busting character of a president he played in a TV sitcom, Servant of the People, during the real-life presidential election campaign and even named his party after it.

For Stuart Culverhouse, head of sovereign and fixed income research at Tellimer Research, the “serious work” for Zelenskyy will start after elections.

“Investors and IFIs [international financial institutions] hope that he will be able to form a reformist government with a stable majority, and that he will succeed in implementing reforms where his predecessors have failed,” he said.

About 35 million Ukrainians are of voting age, but several million in Russian-annexed Crimea and rebel-held parts of eastern Ukraine are unable or unwilling to cast their ballots in the crucial vote. As their constituencies have been suspended since 2014, 26 seats will remain empty in the parliament.