Dozens of wounded people continued to throng the corridors of Sudan‘s Royal Care Hospital on Tuesday, a day after a deadly crackdown on protesters outside the military headquarters in the capital, Khartoum.

Some sat on the floor with their wounds bandaged, as others with gunshot injuries lay waiting for help from doctors who had been working round the clock for more than a day.

Outside the hospital in central Khartoum, more than a dozen military trucks carrying armed soldiers lined the street. They were from the paramilitary Rapid Support Forces (RSF), the same faction that launched the raid that killed more than 35 people on Monday.

A medic, who identified himself as Nazar, said the soldiers surrounded the hospital early on Tuesday morning. Shortly after noon, they ordered the hospital staff to evacuate all wounded protesters within an hour.

“One of their seniors came into the hospital and told the administration to evacuate the hospital of patients,” Nazar said. The soldier “said they don’t want the patients here”, he said.

Some 50 wounded people were forced to leave, and according to Nazar, the only protesters left inside the hospital by the end of the day were those hospitalised in the wards.

Sources at the hospital also told Al Jazeera the soldiers arrested one of the doctors, identified as Waleed Abdullah, after shooting him in the leg.

The doctor was part of the medical team at the weeks-long sit-in, which was cleared out at dawn on Monday. Witnesses at the raid said troops also shot and beat doctors and medics working at medical tents at the protest site.

“They used whips and sticks to beat the doctors,” a medic who witnessed the attack said. Requesting anonymity for fear of reprisal, she said the beatings were so severe that some of the doctors and medics had to be taken to hospitals for treatment.

“One of our colleagues had his arm broken when the RSF beat him,” she said.

‘It’s either you or the nation’

In addition to the 35 people who were killed during the raid on Monday, more than 200 were wounded, according to a doctor’s committee aligned to the protest movement. Many were still missing on Tuesday and feared dead, the group said.

The attack, which protest leaders described as a “massacre”, came nearly two months after the Sudanese military toppled President Omar al-Bashir following months of protests against his nearly 30 years of rule. A 10-member Transitional Military Council (TMC) took power and promised elections within two years, but protesters continued their sit-in, demanding a civilian-led transition to democracy.

The two sides began negotiations, but tensions mounted as talks stalled over the composition of a new transitional authority. Monday’s violence, which drew global condemnation, did not come as a surprise to the protesters.

Hours before the attack, the Sudanese Professionals Association (SPA), which has led the anti-government protests since December, issued a statement urging more people to join the sit-in. It also called on medics to prepare for an emergency. Some who answered the call marched to the sit-in calling on protesters to prepare to die.

“It’s either you or the nation. Prepare your Kafan”, they chanted, referring to the white sheet used in Muslim burial rites.

Protesters said they had anticipated that a large number of people would deter such an attack, but those hopes were misplaced. Live videos of the raid, streamed online, showed soldiers using live ammunition as they advanced on the protesters.

A demonstrator who used to guard the makeshift barricades leading to the sit-in said he saw large numbers of soldiers being bussed in before the attack.

“They first drove in with their military pick-ups and blocked the entrance to the headquarters of the air and naval forces,” he told Al Jazeera on the condition of anonymity. “Then other pick-ups with men dressed in police uniforms but were clearly RSF drove in.”

The shooting started shortly after 5am local time. The witness said the soldiers opened fire on people in the reflective vests worn by protesters guarding the barricades. The troops beat protesters and forced them to dismantle barricades to allow the military trucks through, he added.

The ensuing attack was recorded by fleeing protesters.

“They’re killing us!” one protester was heard in a video as sounds of gunshots cackled in the background. “People, those forces are killing us!”

In other videos, verified by Al Jazeera, protesters can be seen shouting for help while still others bleeding on the ground as they took their last breaths.

“The RSF were shooting at the protesters and so we ran for cover,” said Fawaz, who gave only one name.

“Some of them jumped off their pickups and headed towards the sit-in area, shooting at people, and beating those who ran to escape them. We ran, helping one of those injured by a bullet.”

Fawaz, who was also a guard at the barricades, said the soldiers shot at people who tried to help wounded protesters.

“When we tried to help our injured colleague jump over a wall with us, the RSF started shooting,” he recalled. “We couldn’t help him jump the wall with us as we escaped because he sustained more bullet wounds. We don’t know if he’s alive or dead.”

The TMC has denied attacking protesters, saying clashes erupted at the protest camp when security forces followed a number of “unruly” people who had fled to the sit-in from a nearby area, known as “Colombia”.

The deadly violence, however, has prompted calls for an international inquiry.

“The decision to unleash violence against peaceful protesters is absolutely unjustified and unlawful, and a slap in the face for those who have been pursuing dialogue to achieve a handover to civilian government,” said Jehanne Henry, associate Africa Director at Human Rights Watch.

“UN member states should urgently establish an impartial, independent UN inquiry into these atrocities, and ensure that those responsible for killings, detentions, destruction, and looting are held accountable.” 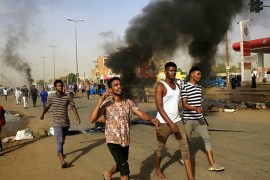 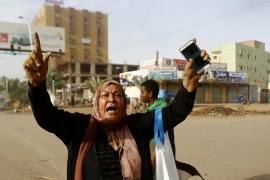 Are hopes fading for democracy in Sudan?

Deadly crackdown on demonstrators by paramilitary force raises fears about the transition to civilian governance. 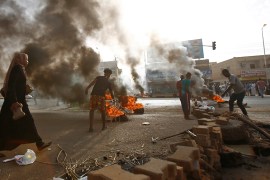