The United States said it is winding down Turkey’s involvement in its F-35 stealth fighter jet programme over Ankara’s plans to buy a Russian air defence system that could pose a danger to the aircraft.

US officials announced on Monday that Washington had halted the training of Turkish pilots on F-35 fighters at an airbase in the US state of Arizona.

The move at Luke Air Force Base comes faster than expected, days after acting US defence chief Patrick Shanahan told his Turkish counterpart their pilots already in the country could remain until the end of July.

Washington says Turkey cannot have both.

On Tuesday, Russia said it plans to deliver the system to Turkey in July.

The standoff threatens to bring US sanctions, which would hurt Turkey’s already recession-hit economy, and raise questions over its role in the North Atlantic Treaty Organization.

“The department is aware that the Turkish pilots at Luke AFB are not flying,” Air Force Lieutenant-Colonel Mike Andrews, a Pentagon spokesman, told Reuters news agency.

“Without a change in Turkish policy, we will continue to work closely with our Turkish ally on winding down their participation in the F-35 programme.”

A second US official, speaking on condition of anonymity, said a local commander at Luke decided last week to halt the training of Turkish pilots and maintenance crews over safety concerns.

Some training of Turkish maintenance personnel continues at Eglin Air Force Base in Florida, the official said.

Turkey is a partner in the F-35 programme that helped fund the development of the fighter jet. It plans to buy 100 aircraft and already owns four, which are currently on American soil and used for training purposes.

Strains in American-Turkish ties already extend beyond the F-35 and S-400 to include conflicting strategy in Syria, sanctions on Iran, and the detention of US consular staff in Turkey.

Turkey has vowed to move ahead with the S-400 purchase from Moscow, regardless of US warnings.

President Recep Tayyip Erdogan said last week it was “out of the question” for Turkey to back away from its deal with Moscow.

Ankara said on Tuesday a US House of Representatives’ resolution condemning its S-400 purchase while suggesting sanctions was “unacceptably threatening”.

The resolution introduced in May was agreed in the House on Monday.

It urged Turkey to cancel the S-400 purchase and called for sanctions if Ankara accepts their delivery.

“We rarely see it in foreign affairs, but this is a black-and-white issue. There is no middle ground. Either Mr Erdogan cancels the Russian deal, or he doesn’t,” Eliot Engel, chairman of the House Committee on Foreign Affairs, said on the House floor.

“There is no future for Turkey having both Russian weapons and American F-35s.”

In response, Turkey’s foreign ministry said in a statement its foreign policy was being maligned by “unfair” and “unfounded” allegations in the resolution.

“It is unacceptable to take decisions which do not serve to increase mutual trust, to continue to keep the language of threats and sanctions on the agenda,” it added.

On Tuesday, the credit rating agency Fitch said that any US sanctions on Turkey would have a “significant impact” on sentiment around the Turkish lira.

The US offered to sell Turkey the American-made Patriot missile defence system earlier this year after Ankara sealed the S-400 deal with Russia.

Turkey says the delivery of Patriots would take a long time and the deal does not include joint production of the missile system.

Officials in Ankara say Turkey will carry out joint production of S-400 missiles with Russia in line with their agreement.

“Everything is on track with the Turks. I hope that we will begin to deliver in about two months,” Sergey Chemezov told Turkish media.

“The credit money has been spent, the technology was produced. And we completed training of all the military personnel,” he said. 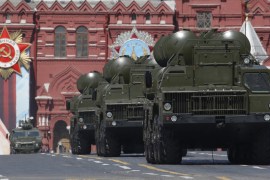 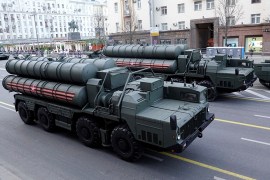 Erdogan: No step back from S-400 deal with Russia

Turkish president says US offer to sell Patriot missiles to Ankara is not as good as Russia’s S-400 offer. 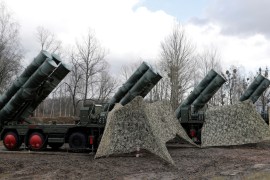 Russia condemns ‘US ultimatum’ to Turkey over S-400 missile deal