Austria‘s Chancellor Sebastian Kurz has called for fresh elections after his ruling coalition collapsed following an apparent video sting that forced his deputy to step down.

In a statement on Saturday, Kurz said he would ask the country’s President Alexander Van der Bellen to hold a new vote “as soon as possible”.

The call came hours after Heinz-Christian Strache, the vice chancellor and leader of the far-right Freedom Party (FPO) resigned over a covert video that appeared to show him offering government contracts to a Russian woman in exchange for campaign help.

Kurz, a conservative who formed a coalition with the FPO a year and a half ago, said the sting was the last straw in the relationship.

“Enough is enough … The serious part of this was the attitude towards abuse of power, towards dealing with taxpayers’ money, towards the media in this country,” said the chancellor, who heads the centre-right People’s Party.

Kurz said he could not reach an agreement with the leadership of Strache’s FPO on carrying forward the coalition, adding that a possible coalition with the centre-left Social Democrats would derail the government’s programme of limiting debt and taxes.

Shortly after Kurz’s statement, Austrian President Alexander Van der Bellen expressed support for a snap vote and said he would meet with the chancellor again on Sunday to talk over the next steps.

Opposition parties including the Social Democrats, the liberal Neos party and the Greens have also called for fresh elections in the wake of the scandal.

The downfall of the Austrian coalition comes just a week before elections for the European Parliament and is a blow to one of the most successful anti-immigrant, nationalist parties that have surged across the continent in recent years. The FPO is a major part of a new nationalist grouping that aims to score record gains in the European vote.

Strache quit as vice chancellor and party leader earlier on Saturday after the video was released by two German news organisations. He acknowledged that the video was “catastrophic” but denied breaking the law.

In the footage – aired by the German daily Sueddeutsche Zeitung and weekly Der Spiegel newspapers – Strache was seen meeting a woman posing as the niece of a Russian oligarch in 2017,  shortly before the election that brought him to power.

Strache and party colleague Johann Gudenus are heard telling the unnamed woman she could expect lucrative construction work if she bought Austria’s Kronen Zeitung newspaper and supported the Freedom Party. He is also seen discussing rules on party financing and how to work around them, although he also insisted on having to act legally.

The German publications did not reveal the source of the video.

In his resignation statement, Strache apologised but said he was set up in a “political assassination”. He conceded his behaviour in the video was “stupid, irresponsible and a mistake”.

Strache, whose party has a cooperation agreement with Russia‘s ruling United Russia party, said no money changed hands during the 2017 meeting.

He insisted the only crime that took place was illegally videotaping a private dinner party.

Al Jazeera’s Sonia Gallego, reporting from London, described the timing of the scandal as “very bad” for Strache’s party because of the upcoming European elections.

“This has been quite an extraordinary downfall for the leader of the Freedom Party … just only a week to go until the European elections,” Gallego said, adding the incident had raised “a lot of questions” about how the FPO “finances its own coffers”.

EU parliamentarian Hans-Olaf Henkel said the FPO “as well as many other right-wing parties in Europe are apparently much-supported by Russia”.

“For the first time, with the Austrian far-right party, we have found a smoking gun and that‘s why Strache had to resign,” Henkel told Al Jazeera from the German capital, Berlin. 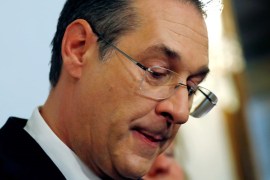 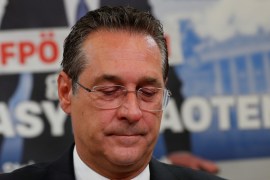 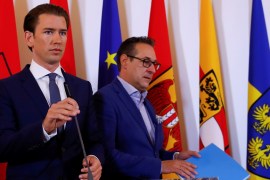