Speaking to reporters on Wednesday, Lieutenant-General Yasser al-Atta said a final agreement on the sharing of power, including the formation of the next ruling body – the sovereign council – would be signed with the protest movement the Alliance for Freedom and Change within 24 hours.

“We agreed on a transitional period of three years,” Atta said.

“We vow to our people that the agreement will be completed fully within 24 hours in a way that it meets the people’s aspirations,” he added.

Wednesday’s crucial negotiations are due to start at 9pm (19:00 GMT), said Khalid Omar Yousef, a leader from the protest movement the Alliance for Freedom and Change. “The announcement is expected after midnight,” he told AFP news agency.

Satea al-Hajj, a Declaration of Freedom and Change Forces member, said: “The viewpoints are close and, God willing, we will reach an agreement soon.”

Thousands of protesters have been holding a sit-in outside the army headquarters in the capital, Khartoum, for weeks, demanding that the army generals, who took power after toppling al-Bashir on April 11, step down.

Some expressed caution over the prospects for an agreement that would satisfy their demands.

“We are still sticking to our plan,” said Altaj Blah, a protester in central Khartoum. “The barriers are there and they are not moving until our demands are met.”

The army generals had initially insisted on a two-year transition period, while the protest leaders wanted four years.

Atta also said, during the transition period,  Parliament would be composed of 300 members, of which 67 percent would be from the Alliance for Freedom and Change and the rest would be from other political groups.

The first six months of the transitional period would be allocated to signing peace accords with rebels in the country’s warzones, he added.

At least four people died and dozens were wounded during protests on Monday as the military rulers and opposition leaders said they had reached a partial agreement for the transition.

Opposition figure Madani Abbas Madani, speaking to a news conference alongside Atta just past midnight, said the transitional military council had formed a committee to investigate the attacks of protesters. He also said a joint committee was set up with the opposition to thwart any attempt to break up the sit-in at the army headquarters.

Gunfire rang out in the capital into the night on Monday after paramilitary Rapid Support Forces (RSF) – whose head is the deputy of the military council – had patrolled the streets using tear gas and guns to disrupt demonstrations.

The protesters, who want to keep the pressure on the military for a swift handover, were back on Tuesday, blocking roads and bridges with bricks and rocks.

“We’ve seen the protesters escalating their methods of trying to put pressure,” Al Jazeera’s Hiba Morgan, reporting from Khartoum, said. “They have reinforced their barricades on the roads that lead to the army headquarters sit-in, they have erected  barricades on new roads and they have blocked main streets.”

“The protesters will be waiting to hear if that transitional period will be headed by the military or by the opposition coalition – that is going to be the decisive factor.” 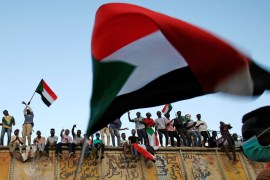 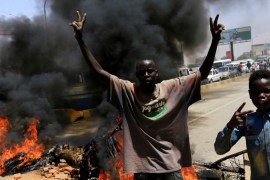 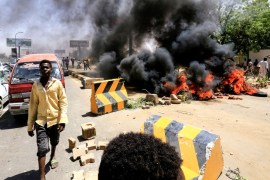 Several protesters and one army major killed in Khartoum as tear gas and live rounds fired against demonstrators.