Sudan‘s military has overthrown and arrested President Omar al-Bashir after months of protests against his nearly 30-year rule.

In a statement on Thursday, General Awad Ibn Auf, head of the Supreme Security Committee – a body comprised of the armed forces, police, and other security agencies – said al-Bashir had been taken to a “safe place” after the “toppling of the regime” and also announced the formation of a military-led transitional government, which will rule for two years.

“During this time, the armed forces will take on – with limited representation of the other elements of the Committee – the responsibility of administering the state and preventing the shedding of priceless Sudanese blood,” said Ibn Auf, the country’s vice president and defence minister.

The announcement drew the scorn of protesters, however, who accused the military of engineering a “regime coup” and failing to meet their demands for a civilian-led transitional government.

Ibn Auf also declared a three-month state of emergency and the suspension of the 2005 constitution, as well the closure of Sudan’s airspace for 24 hours and of border crossings until further notice.

All of Sudan’s government institutions, including the National Assembly and national council of ministers, have been dissolved, Ibn Auf added, assuring viewers that Sudan would soon prepare for “free and fair” elections.

The army also slapped a month-long night-time curfew on the country, due to start around 10pm (20:00 GMT).

Sudan’s state security agency, meanwhile, said authorities would release all political detainees. The National Security and Intelligence (NISS) service did not indicate when the release would take place.

Ibn Auf’s announcement came against the backdrop of a sixth successive day of anti-government protests outside Sudan’s army headquarters in the capital, Khartoum.

Demonstrators have staged a mass sit-in outside the complex to call for the army to support their bid to see al-Bashir peacefully removed from power.

The Sudanese Professionals Association (SPA), which has been spearheading the protests, rejected Ibn Auf’s move as a “military coup”, however, and vowed to hold further demonstrations.

The SPA said in a tweet it was demanding the “handover of power to a civilian transitional government that reflects the forces of the revolution”.

But Al Jazeera’s Hiba Morgan, reporting from Khartoum, said the “future of Sudan is very much in the hands of Ibn Auf”.

“Most of the members [of this military council] are part of the ruling [National Congress] party and old regime … [but] the protesters want new leaders, civilian leaders, not the military,” Morgan said.

Protests against al-Bashir, who took power in 1989 and is wanted by the International Criminal Court, started in December over rising bread prices but quickly morphed into broader calls for him and his political entourage to release their grip on power.

Representatives of the anti-government Girifna resistance movement, which has helped organise the anti-government protests, said the group would also continue to protest until its demands for a political overhaul were met and described Ibn Auf’s announcement as a “slap in the face”.

“The three-month state of emergency and two years transition is not what we were fighting for,” Girifna member Hajouj Kouka told Al Jazeera from Kenya.

“We are going to use the same momentum that we had to fight Ibn Auf, he is the new enemy … we are not done,” he added.

Kouka said Girifna wanted a transition period managed by “technocrats” to ready Sudan for democracy, overseen by an “army that will protect us rather than rule over us”.

“We [the demonstrators] are very specific and untied about this demand,” he added.

The downfall of al-Bashir follows the toppling this month of Algerian President Abdelaziz Bouteflika, also following mass protests after three decades in power.

Analysts said some parallels could be drawn between the political turmoil in Sudan and that in Algeria, as well as elsewhere “across the Arab world”.

“Algeria provides a precedent … with the protest movement [there] being led largely by young people calling for change,” Ahmed Soliman, a Horn of Africa research fellow at the UK-based Chatham House institute of international affairs, told Al Jazeera.

“[But] we should be hesitant about over comparisons, as these [movements] are driven by domestic and local issues and based largely around events occurring within the countries themselves,” he added. 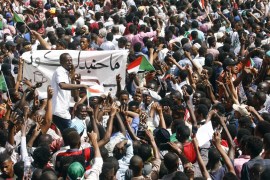 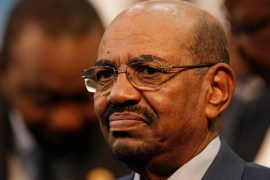