A US-backed Syrian force closing in on ISIL’s last territorial bastion near the Iraqi border expects a “decisive battle” on Sunday after advancing slowly, a spokesperson for the group said.

Capturing Baghouz, an eastern Syrian village on the bank of the Euphrates River, would cap four years of international efforts to roll back the Islamic State of Iraq and the Levant (ISIL, also known as ISIS) group.

Thousands of fighters, followers and civilians had retreated to Baghouz, a tiny cluster of hamlets and farmland in Deir Az Zor province, as ISIL’s territory shrunk, and over the last few weeks, they have poured out in greater numbers than expected, holding up the final assault.

After removing the remaining civilians on Friday, the Syrian Democratic Forces (SDF) resumed their assault on the village and clashed with ISIL fighters for nearly 18 hours inside Baghouz, according to Marvan Qamishlo, an SDF media official.

“Our forces are advancing at a slow pace to avoid any problems since ISIL mined the area extensively. Thousands of mines are present along the roads in that small patch,” he said.

“We expect a decisive battle in the morning,” he told Reuters news agency on a hill overlooking Baghouz.

The remaining fighters are mostly foreigners who are using tunnels to hide and launch surprise attacks against the SDF fighters, added Qamishlo.

But once Banghouz falls, and ISIL suffers what some are calling a “final” territorial defeat, the group and its members will remain a serious threat.

“This isn’t the end of ISIL at all,” Sami Nader, an analyst for al-Monitor’s Lebanon Pulse told Al Jazeera. “We’ve seen how ISIL and similar groups are thriving in Africa, and I won’t be surprised if these same groups will target civilians, or they will have military operations inside Europe and the US.”

“All the grudges that led to the emergence of this group are still there,” he added.

The evacuees on Friday were mostly women and children, but included some wounded men. There were Russians, Indonesians, Bosnians, Daghestani, Kazakhs, Egyptians, Syrians and Iraqis.

Umm Mohammed, a 38-year-old Syrian, left Baghouz with her three children on Friday but her husband stayed behind in support of ISIL

“There are many fighters and families inside,” she told the Associated Press news agency. “ISIL is weak only in Baghouz but elsewhere it is expanding and growing.”

The military campaign to uproot the fighters from the eastern banks of the Euphrates River began in September, pushing them down towards this last corner in the village of Baghouz, near the Iraqi border.

ISIL had used civilians as human shields against air strikes in Baghouz, holding thousands of civilians all huddled in a makeshift camp on the edge of the village, according to evacuated families.

The SDF has said that those who did not use last week’s humanitarian window to be evacuated were essentially choosing to die in Baghouz. 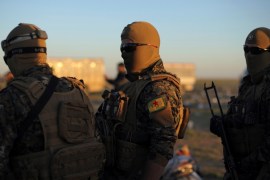 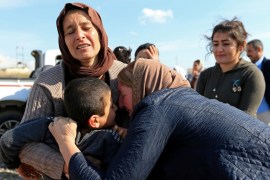 Yazidis held captive by ISIL reunite with their families in Iraq

A group of Yazidis, mostly children, reunite with their families after returning from last ISIL-held pocket in Syria. 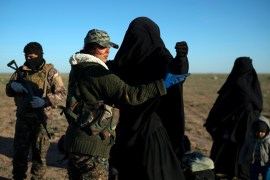