At least 19 people have been confirmed dead and scores more injured after a fire broke out in a high-rise office building in Dhaka, rescue officials have said.

Many people were trapped inside the building when the fire broke out in the Bangladeshi capital on Thursday and rescue workers warned that the death toll could rise as firefighters search the charred structure.

More than 100 people had been rescued from the building through helicpoters and ladders, said Julfikar Rahman, director of the Fire Service and Civil Defence.

“Our firefighters are searching for bodies on every floor,” Rahman told Reuters news agency.

The blaze at the FR tower, located on a busy avenue in Dhaka’s Banani commercial district, was the latest in a city where flouted building regulations and safety norms have made deadly blazes common.

Witnesses described seeing people shouting for help from windows on the upper floors of the building. Some workers slid down a television cable on the side of the building, while others grabbed ropes that were lowered by emergency service helicopters which pulled them out of the blaze.

Many of my colleagues are still trapped in the office

“When I heard a fire broke out in the building, I quickly rushed out of the building,” Shoikot Rahman told AFP news agency.

“Many of my colleagues are still trapped in the office,” said Rahman who ran to safety after hearing colleagues raise the alarm.

A military spokesman, Abdullah Ibne Zaid, said the body of a Sri Lankan man was brought to the army’s Kurmitola Hospital and another 45 people were being treated there. Another fatality was reported at the Dhaka Medical College hospital.

Helicopters dropped water on the blaze as flames and thick black smoke poured out of the windows.

Scores of firefighters were backed by navy and air force specialists, authorities said.

Al Jazeera’s Tanveer Chaudhry, reporting from Dhaka, said that the death toll was expected to rise as the rescue workers moved through the office building.

“It is an ongoing, active situation,” he said. “There is smoke inside and the rescue operation is still on. The fire department told me they face severe difficulties in the operation because there are so many high-rise buildings close to each other and the streets are narrow.

“What made it twice as difficult was the number of people, onlookers, which made it difficult for the rescue workers’ mobility. Thousands of people are onlooking here.”

A massive blaze in Dhaka’s old quarter on February 21 killed at least 70 people and injured 50 others.

A June 2010 fire in the nearby neighbourhood of Nimtoli, one of the most densely populated districts of the capital, killed 123 people.

In November 2012, a fire swept through a nine-story garment factory near Dhaka killing 111 workers. An investigation found it was caused by sabotage and that managers at the plant had prevented victims from escaping.

Authorities are still carrying out a drive to close down illegal chemical stores and warehouses in apartment buildings, launched after last month’s disaster in the old city. 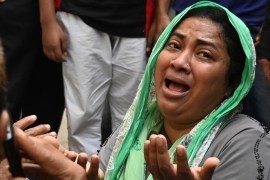 People rushed to the scene and the hospital as at least 70 killed in blaze that ripped through the residential area. 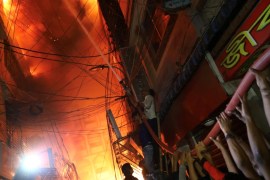 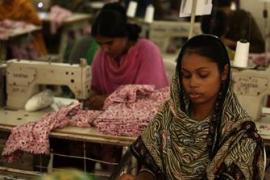 Made in Bangladesh: Behind the Factory Fire

An insight into Bangladesh’s clothing supply chain and working conditions in the country’s garment factories.