After five years in prison, Alaa Abdel Fattah, a high-profile Egyptian blogger and rights activist, is due to be released from prison on Wednesday, his family said.

His sister Mona Seif, a prominent human rights activist herself who founded the No to Military Rule movement, tweeted that the family was still waiting for the release process to begin.

“We hope it goes smoothly without any unnecessary delays and detours that only serve to put him through even more stressful times,” she posted.

Abdel Fattah was arrested in November 2013 and eventually sentenced to five years in prison in a trial that lasted over a year.

He was charged with organising an illegal protest against military trials and assaulting a police officer. The court discounted evidence, including mobile phone records, which showed that Abdel Fattah was not at the scene of the protest.

His release from the notorious Tora prison will not bring him complete freedom. As part of his parole period, Abdel Fattah would have to spend the night at a local police station for the next five years and will be under police surveillance during that time.

The software developer, who co-founded the blog Manalaa with his wife Manal, won the Special Reporters Without Borders Award in Deutsche Welle’s Best of Blogs competition in 2005.

He is a big supporter of initiatives that endorse citizen journalism and spearheaded Egypt’s blogging movement. He is also a vocal proponent of freedom of expression and the promotion of free speech.

The couple has a son, Khaled, who was born in 2011 and named after Khaled Said, whose death in police custody in the summer of 2010 stoked anger among protesters in the run-up to the Egyptian uprising in January 2011.

Abdel Fattah has been imprisoned several times before, under the rule of every Egyptian head of state during his lifetime. Under the Hosni Mubarak government in 2006, the then 22-year old was arrested for taking part in a peaceful protest that called for political reforms and democracy and spent 45 days in jail.

After the overthrow of Mubarak in 2011, the country was placed under the interim rule of Supreme Council for Armed Forces (SCAF), of which Abdel Fattah was a vocal critic. He was arrested by SCAF for participating in what became known as the Maspero protests, in which 27 demonstrators were killed by military forces.

Days after former Egyptian President Mohamed Morsi was overthrown by a military coup in July 2013, Abdel Fattah and 10 other defendants were acquitted in a trial that had accused them of inciting protests against Morsi.

According to human rights organisations, there are more than 60,000 political prisoners in Egypt who are often subjected to solitary confinement, torture, prolonged pre-trial detention and enforced disappearances. 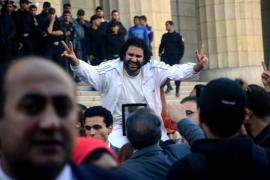 Alaa Abdel Fattah and the ‘democracy virus’ in Egypt

By attempting to silence an entire generation, Egypt’s leaders are paving the way for a much more violent future.