Cyclone winds and floods that swept across southeastern Africa have affected more than 2.6 million people and could rank as one of the worst weather-related disasters recorded in the southern hemisphere.

Rescue crews were still struggling to reach victims on Wednesday, six days after Cyclone Idai raced in at speeds of up to 170 kph from the Indian Ocean into Mozambique, then its inland neighbours Zimbabwe and Malawi.

Aid groups said many survivors were trapped, clinging to trees and crammed on rooftops in remote areas, surrounded by wrecked roads, flattened buildings and submerged villages.

“This is the worst humanitarian crisis in Mozambique’s recent history,” said Jamie LeSueur, who is leading rescue efforts in the hard-hit city of Beira for the International Federation of Red Cross and Red Crescent Societies.

The organisation said large areas to the west of Beira were severely flooded, and in places close to the Buzi and Pungwe rivers, flood waters are metres deep, completely submerging homes, telephone poles and trees.

Death toll in the flood disaster has crossed 200 in Mozambique, according to President Filipe Nyusi.

Nyusi said on Monday he had flown over some of the worst-hit zones, seen bodies floating in rivers and now estimated more than 1,000 people may have died.

The cyclone hit land near Beira on Thursday and moved inland throughout the weekend, leaving heavy rains in its trail on Tuesday.

Mozambique’s government said about 600,000 people have been impacted by the storm, but the UN World Food Programme said its analysis of satellite imagery suggested up to 1.7 million people in the country were in Idai’s path.

“This is a major humanitarian emergency that is getting bigger by the hour,” said Verhoosel. The flooding of the Pungue and Buzi rivers had created “inland oceans extending for miles and miles in all directions,” Verhoosel said.

Dams were at 95 percent to 100 percent capacity.

“Those visible from the air may be the lucky ones and the top priority now is to rescue as many as possible and ferry them to safety”, he added.

Al Jazeera’s Fahmida Miller, reporting from Beira, said power lines were down in the city and surrounding areas.

“There’s also no communication. People are not able to call for help, while others are unable to determine where missing people are,” she said.

“The roof of the city’s main hospital was torn away during the cyclone. That hospital is also running out of medicine.”

Reporting anger and frustration among survivors in the city, she said: “Residents were told to evacuate ahead of the storm but the question for them was where to.”

Mozambique’s president says Cyclone Idai may have killed as many as 1,000 people as recovery efforts underway. https://t.co/xcDKxZOc0H pic.twitter.com/Y9tX6fGidH

The WFP, meanwhile, warned Beira could face a “serious fuel shortage” in the coming days and said its power grid was expected to be non-functional through the end of the month.

In central Mozambique, emergency teams set off in boats, plucking survivors from roofs and treetops in an operation that stretched long into the night.

Some 60km northwest of Beira, 27-year-old Jose Batio told the AFP news agency his wife and children survived by climbing onto a roof. But a lot of their neighbours “were swept [away] by the water,” he said.

“Water came like a tsunami and destroyed most things. We were prisoners on the roof,” he said after they were rescued by boat.

Air force personnel from Mozambique and South Africa were also drafted in to fly rescue missions, while an NGO called Rescue South Africa said it had picked up 34 people since Friday night, using three helicopters.

Ian Scher, who heads Rescue SA, said the rescue teams were having to make difficult decisions.

“Sometimes, we can only save two out of five, sometimes we drop food and go to someone else who’s in bigger danger,” he told the AFP news agency.

“We just save what we can save and the others will perish.”

Al Jazeera’s Malcolm Webb, reporting from Mozambique’s central Espungabera, said torrential rain continued to lash the region “on and off” on Tuesday.

“Rivers have swelled, washing away bridges, houses, schools, hospitals, and farms,” he said. “Down the road, several trees came down taking down the power lines, so there is no electricity and no running water in most of the affected areas, and almost no communication.”

Those displaced by the disaster were taking shelter at schools and government buildings in Espungabera, a town connected to the rest of Mozambique by only two roads, both of which have been washed away, he added.

Worst hit was Chimanimani in Manicaland, an eastern province which borders Mozambique. Families started burying their dead in damp graves on Monday, as injured survivors filled up the hospitals. 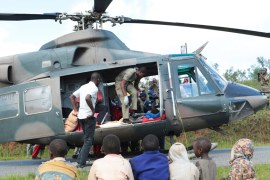 The country’s estimated death toll is 98 and is expected to rise with many people still missing. 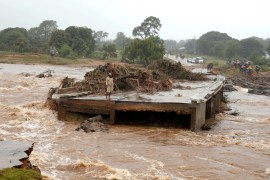 Death toll rises to 215 as the cyclone tore through Malawi into central Mozambique before hitting Zimbabwe. 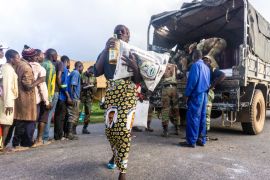