President Filipe Nyusi feared the death toll could rise to 1,000 in Mozambique in the wake of Cyclone Idai he said in a nationwide address on Monday.

“For the moment we have registered 84 deaths officially, but when we flew over the area … this morning to understand what’s going on, everything indicates that we could register more than 1,000 deaths,” he said.

So far the total death toll has risen to at least 215 after the storm tore into central Mozambique last week before continuing on to Zimbabwe and Malawi, bringing flash floods and ferocious winds.

At least 126 people were killed in Mozambique and Malawi, according to the Red Cross, and Zimbabwe’s information ministry on Monday put the number of dead at 89 in the country.

Hundreds are missing and more than 1.5 million people have been affected across the three countries by widespread destruction and flooding.

Most of the deaths in Mozambique happened in the central port city of Beira, 90 percent of which was destroyed, according to the International Federation of Red Cross and Red Crescent Societies (IFRC).

A large dam burst on Sunday in the city, cutting off the last road to the city of about 530,000 people, the IFRC said in a statement.

“The scale of damage caused by Cyclone Idai that hit the Mozambican city of Beira is massive and horrifying,” it said.

The IFRC warned that the death toll could rise once the full scale of the devastation is known, with further heavy rains expected.

“First came ferocious winds and torrential rain that lasted almost four days. It only eased up a short while ago,” said Al Jazeera’s Malcolm Webb, reporting from central Mozambique.

“The damage is extensive even 300km [from the cyclone’s landing area] where we are. Hundreds of houses are destroyed in this district alone. People are sheltering in schools or with neighbours.”

“These are some of the things we are trying to provide. Mozambique Red Cross volunteers are already on the ground as well as the IFRC’s international team,” he said.

In Zimbabwe, Idai tore across the eastern and southern parts of the country, a government official said on Monday, creating a humanitarian crisis in a nation grappling with economic woes and a drought.

Chimanimani district has been cut off from the rest of the country by torrential rains and winds of up to 170km an hour that swept away roads, homes and bridges and knocked out power and communication lines.

Rescuers are struggling to reach people in Chimanimani, many of whom have been sleeping in the mountains since Friday after their homes were flattened by rock falls and mudslides or washed away by torrential rains.

Many families cannot bury the dead due to the floods.

The government has declared a state of disaster in areas affected by the storm, the worst to hit the country since Cyclone Eline devastated eastern and southern Zimbabwe in 2000.

The country of 15 million people is already suffering a severe drought that has wilted crops. 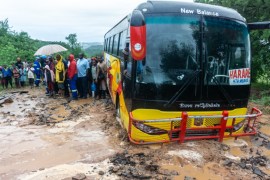 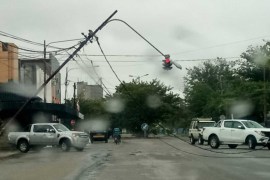 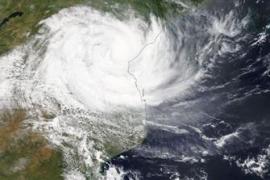