Indian Prime Minister Narendra Modi has come under fire from the civil society and opposition for continuing his scheduled public events, including an election rally, while staying mum amid a major military standoff with Pakistan.

“The government’s message to the outside world is that India wants peace. But inside the country, the prime minister, his cabinet colleagues and senior party colleagues are on the campaign trail, addressing election rallies in which they are calling for war,” Professor Apoorvanand, an academic and activist, told Al Jazeera on Thursday.

Priyanka Chaturvedi, a member of the opposition Congress party, said that “sensitive information is coming only through leaks from unnamed government officials”.

“This is giving rise to fake news and giving irresponsible media outlets a free run,” she said.

No senior minister of Modi’s government has briefed the media since Indian fighter jets carried out air raids on Tuesday across the border in response to the February 14 suicide attack in Indian-administered Kashmir.

Pakistan responded on Wednesday with an air raid of its own in the Indian-administered Kashmir. It also brought down at least one Indian warplane and captured its pilot, Wing Commander Abhinandan Varthaman.

Even as the dramatic exchange on Wednesday triggered fears of an all-out confrontation between the two nuclear-armed South Asian rivals, Modi launched a mobile app at the National Youth Parliament Festival and travelled to the ISKCON temple in New Delhi, posing for photos with commuters.

Modi and his senior cabinet colleagues have kept their distance from the media, while Pakistan Prime Minister Imran Khan held multiple press conferences in which he repeatedly called for a diplomatic solution to the crisis.

On Thursday, as Modi addressed his party workers through video-conferencing, Khan announced the release of the captured Indian pilot in his third major address on the issue.

The ruling party leaders have been accused of exploiting the latest confrontation with India’s region rival for electoral gains.

Amit Shah, Modi’s closest confidante and the president of the ruling BJP, on Wednesday addressed an election rally in Uttar Pradesh state where he said that only Modi and the BJP could give a “fitting reply” to Pakistan and “wipe out terrorism”.

BS Yeddyurappa, another senior BJP leader and former chief minister of the southern state of Karnataka, said at a separate election-related event that the air raids will help the party win 22 seats in the state.

Opposition parties have slammed the government in a joint statement accusing the prime minister and his colleagues of politicising the ongoing crisis with Pakistan.

“National security must transcend narrow political considerations,” the statement by a group of 21 parties said that by not convening an all-party meeting, the government had broken an established norm.

The ruling party, in turn, said the opposition was helping Pakistan through its statements.

“At a time when the country should be united, the opposition is creating barriers to unity,” Human Resources and Development Minister Prakash Javadekar said.

Siddharth Varadarajan, senior journalist and founding editor of The Wire, told Al Jazeera that it is the Indian style to avoid press interactions by senior ministers in times of conflict.

“Even during the Kargil war, the prime minister and the defence minister did not address the media. That’s how it is done in India,” said Varadarajan.

The Wire editor, however, said that there has been a clear and consistent attempt by the BJP to link the India-Pakistan conflict with the general elections. 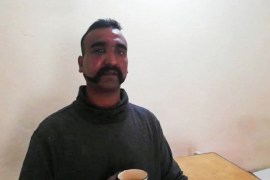 Captured Indian pilot at centre of Kashmir crisis to be released 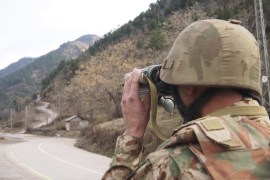 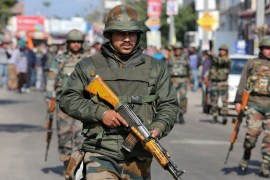 India and Pakistan have fought two wars over the disputed Himalayan region which is the focus of the current crisis.