A man attacked a Hanukkah celebration at a rabbi’s home north of New York City, stabbing and wounding five people before fleeing in a vehicle, police have said.

Police said the stabbings happened at about 10pm local time on Saturday (03:00 GMT on Sunday) in Monsey, one of several Hudson Valley towns that have seen an influx in large numbers of Hasidic Jews in recent years.

Saturday was the seventh night of Hanukkah. The Orthodox Jewish Public Affairs Council for the Hudson Valley region tweeted reports that the stabbings took place at the house of a Hasidic rabbi during Hanukkah celebrations.

Several state and local officials have described the location of the stabbing as a synagogue. The rabbi’s home is next door to a synagogue.

Weidel said the five people were taken to hospitals for treatment.

Photos and videos posted on Twitter showed large emergency response with paramedics running and pushing stretchers. A number of police and emergency vehicles could be seen in the images.

New York City Police would not immediately confirm whether anyone was in custody.

The Saturday night attack appeared to be the latest in a string targeting Jews in the United States, including an attack at a kosher grocery store in New Jersey earlier this month.

Six people died in the shooting, including the two killers, a police officer and three people who had been inside the store.

A month ago, a man required surgery after he was stabbed while walking to a Monsey synagogue.

Around New York City, police have gotten at least six reports this week – and eight since December 13 – of attacks possibly propelled by anti-Jewish bias. 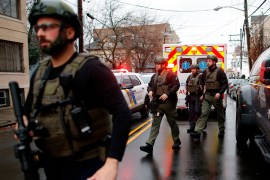 Dead attackers identified themselves as Black Hebrew Israelites, a movement known to rail against whites and Jews. 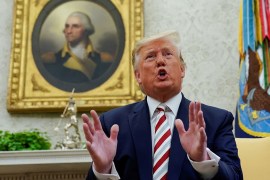 Trump slammed for saying Jews disloyal if they vote for Democrats

Amid ongoing attacks against Rashida Tlaib and Ilhan Omar, Trumps calls majority of Jews in the US uninformed.