US Secretary of State Mike Pompeo has said he warned Russian Foreign Minister Sergey Lavrov against Moscow interfering in the 2020 presidential election during a meeting in Washington that also included President Donald Trump .

The trio also discussed arms control, Ukraine, the war in Syria and Venezuela during the wide-ranging meeting on Tuesday, Pompeo said. The talks represent Lavrov’s first visit to the capital since a controversial Oval Office meeting with Trump in 2017, and come as US House of Representative impeachment proceedings into the president’s dealings with Ukraine, which has been fighting pro-Russia separatists in the country’s east, are picking up steam.

“I was clear it is unacceptable, and I made our expectations of Russia clear,” Pompeo said of election interference at a joint news conference after the meeting. “The Trump administration will always work to protect the integrity of our elections. Period.”

Meanwhile, Lavrov derided the “wave of suspicions that has overcome Washington” related to election interference, renewing demands that evidence of such activity be given to Moscow.

“All speculation about our alleged interference in domestic processes of the United States is baseless,” he said. “No one has given us this proof because it simply does not exist.”

Pompeo added that “we don’t think there is any mistake about what transpired” in regards to the intelligence community’s conclusion that Russia meddled in the 2016.

Lavrov also said Russia is willing to publish a cache of communications between the US and Russia that he says would clear Moscow of the allegations.

“We suggested to our colleagues that in order to dispel all suspicions that are baseless, let us publish this close channel of correspondence starting from October 2016 until November 2017 so it would all become very clear to many people,” Lavrov said through an interpreter. “However, regrettably, this administration refused to do so.”

Hours before Pompeo and Lavrov spoke to reporters, House Democrats announced they are drafting articles of impeachment alleging Trump obstructed justice during the investigation and abused his power by withholding military aid to Ukraine unless its new leader pledged to investigate the son of his political rival, Joe Biden.

While the inquiry centres on Ukraine, Russia has been a major topic in the proceedings, with numerous witnesses telling investigators that Trump’s defenders are echoing a Russian disinformation campaign by accusing Ukraine of meddling in the 2016 presidential election.

Pompeo, speaking to One America News Network a day earlier, said the administration “didn’t pick this date to coincide with the process on Capitol Hill”.

The meeting comes a day after the Justice Department’s internal watchdog found that the FBI was justified in opening its investigation into ties between the Trump presidential campaign and Russia in the 2016 election.

The talks also come a day after the presidents of Ukraine and Russia agreed to revive the peace process on the bloody separatist conflict in eastern Ukraine and exchange all their prisoners, but they failed to resolve crucial issues such as a timeline on local elections and control of the borders in the rebel-held region.

The officials in Washington, DC also discuss Syria, where a US troop withdrawal by Trump forced former Syrian Kurdish allies to pivot to an unlikely alliance with the Syrian government, which is backed by Moscow.

Lavrov last visited Washington, DC in May of 2017, when, during a meeting at the Oval Office, Trump allegedly revealed highly classified details about the threat from the ISIL (ISIS) group with the foreign minister and Russia’s then-ambassador in Washington, DC, Sergey Kislyak.

The Washington Post reported that Trump revealed to Lavrov the city where information was gathered about the threat of laptops in passenger cabins of commercial planes.

The information had come from a US ally that did not authorise the US to share it, according to the report.

The White House denied the accusation but Trump later insisted he had the “absolute right” to share “facts pertaining to terrorism and airline flight safety”. 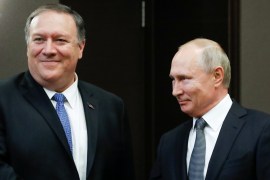 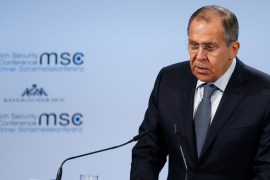 Russian foreign minister dismisses accusations of Moscow interference in the 2016 US presidential as ‘blather’. 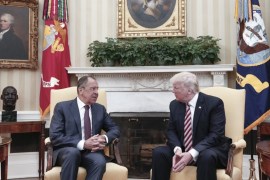