Thousands of Iraqi protesters are blocking roads leading to Iraq’s main Gulf port, according to security sources, as mass demonstrations calling for economic reform and an overhaul of the political system continue for a ninth consecutive day.

Protesters on Saturday burned tyres and set up concrete blocks around the Umm Qasr port, south of the city of Basra, after security forces moved in overnight to try and disperse a sit-in.

Operations at the port, which receives the vast bulk of Iraq’s imports of grain, vegetable oils and sugar, have been at a complete standstill since Wednesday.

Demonstrators first blocked its entrance a day earlier, preventing trucks carrying goods from entering or leaving the facility and prompting some international shipping lines to halt operations there, according to port officials.

“Protesters are upset, they say that the port’s revenue is being diverted away from their city and leaving them with poor basic services,” Ghoneim said.

“They carry signs that say, ‘Iran out of Iraqi affairs’ and ‘The Iraqi government made by Iran’.”

Many Iraqis view the oil-rich country’s leaders as subservient to one or other of Iraq’s two main allies, the United States and Iran, neglecting the needs of ordinary people enduring severe economic hardship.

“A lack of basic services and jobs, accusations of foreign meddling by the US and Iran and alleged government corruption are big themes that have emerged in these protests,” Ghoneim said, adding that protesters at the port were carrying signs expressing anger towards Iran.

But the commander of Iran’s Islamic Revolutionary Guard Corps (IRGC), Hossein Salami, appeared to hit back at criticism of Iran’s role in Iraq and Lebanon, which is also gripped by protests, saying it did not have “an eye on any country”.

“But we will extend our power to the point that if any enemy wants to use a location to attack Iran, we will destroy that location,” Salami said on Saturday.

“So our reach is beyond our own borders meaning that we will extend our area of power to anywhere our enemy intends to plot against us – we have achieved this power,” he added.

Al Jazeera’s Dorsa Jabbari, reporting from Tehran, said it appeared Salami was saying Iran would “not shy away from defending its interests beyond its borders – be that in Syria, Lebanon or Iraq”.

Saturday’s developments came after thousands gathered in Baghdad and across several southern cities on Friday in a bid to keep up the pressure on the country’s political elite amid widespread calls for major reforms and fresh elections.

The rallies are part of a movement that initially erupted in early October, when a previous bout of anti-government demonstrations rocked the country.

More than 250 people have been killed and thousands of others wounded since the protests began, with security forces using tear gas, rubber bullets and live ammunition against those taking to the streets.

President Barham Salih said this week he would approve a snap parliamentary vote once a new electoral law is passed, adding that Prime Minister Adel Abdul Mahdi is willing to resign once political leaders agree on a replacement.

The pledges, however, have seemingly failed to quell the unrest. 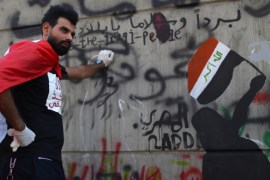 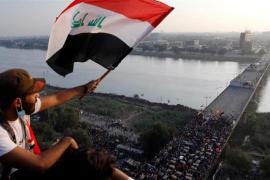 A look at multiple factors that fuelled widespread anti-government sentiment in the country.