Israeli forces in Bethlehem have fired tear gas at Palestinian journalists protesting against the wounding of a colleague by apparent Israeli fire, an incident that sparked outcry among media workers in the occupied West Bank.

Palestinian freelance photojournalist Muath Amarneh has been in Hadassah Hospital in Jerusalem since being hit in the eye on Friday while covering a protest in Surif, close to Hebron.

Amarneh said he was some way from the protesters when he was struck by what he believes was Israeli fire.

“After the clashes started, I was standing to the side wearing a flak jacket with press markings and a helmet,” the 35-year-old told AFP news agency on Sunday.

“Suddenly I felt something hit my eye, I thought it was a rubber bullet or a stone. I put my hand to my eye and found nothing,” he added. “I couldn’t see and my eye was completely gone.”

A video from the incident posted online showed Amarneh being carried off by other journalists while bleeding from his left eye.

Amarneh said doctors at the hospital told him a fragment of metal, about two centimetres (0.8 inches) long, pierced the eye and settled behind it near the brain. His cousin Tareq, accompanying him in the hospital, said doctors planned to extract the metal but decided otherwise after discovering they could also damage the right eye or even trigger bleeding in the brain.

Relatives were quoted as saying by The Associated Press news agency that doctors had informed them Amarneh lost vision in his eye, but hospital officials could only confirm that he suffered a “serious” injury.

Israel’s border police said it did not target Amarneh in Friday’s protest, which demonstrators said was against the confiscation of village land by the Israeli military. The police said it only used “nonlethal” means to disperse the crowd and released a video of someone it says was Amarneh standing behind a group of people throwing stones.

Palestinian President Mahmoud Abbas spoke to Amarneh on the phone and condemned the shooting, pledging to ensure he gets the best medical care for his injury.

Amarneh’s case has drawn significant attention among Palestinians and in several Arab countries, with journalists expressing solidarity by posting photos of themselves wearing eye patches on social media.

Since the incident on Friday, a number of protests have also been held in the West Bank and Gaza City.

In Bethlehem on Sunday, police dispersed a sit-in by journalists at the checkpoint north of the city by firing tear gas at them.

The journalists, who protested with one eye covered in solidarity, held up signs reading: “The eyes of truth will never be blinded.”

In the city of Tulkarem, about 250 journalists took part in a sit-in to show solidarity, according to journalists present.

Palestinian journalists frequently report abuse by Israeli security forces but have little to no recourse for redress.

The Palestinian Journalists’ Syndicate says 60 journalists have been hit by live ammunition this year, the majority in Gaza – an enclave where weekly protests along the border often lead to dozens of demonstrators being wounded.

Last year, Palestinian journalist Yaser Murtaja died of his wounds after being shot by Israeli forces during a mass demonstration along the Gaza fence. The 30-year-old was hit despite wearing a blue flak jacket marked with the word “press”, indicating he was a journalist. 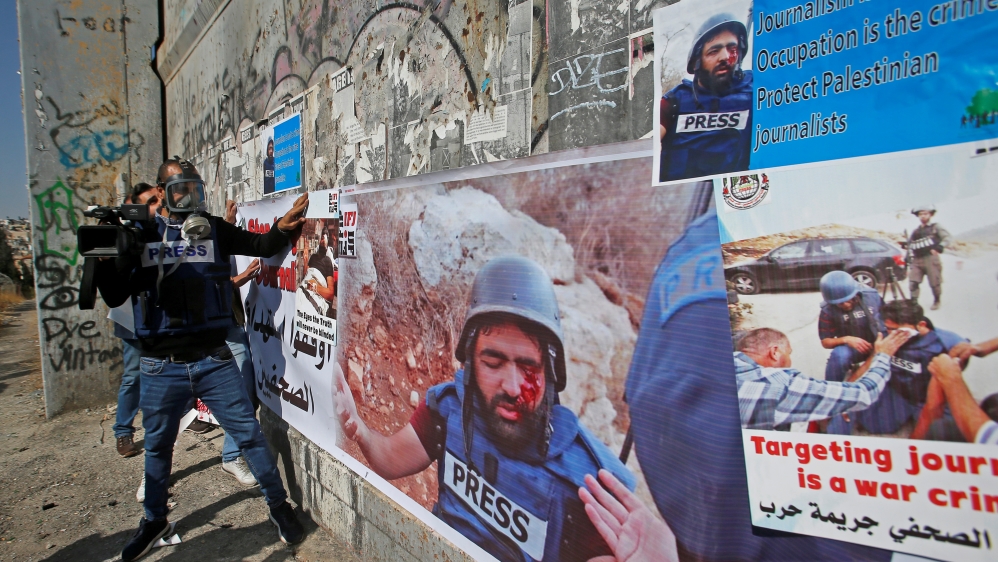