Hassan Nasrallah, the leader of Iran-backed Hezbollah, has called for the quick formation of a new Lebanese government that must listen to the demands of protesters and work to restore confidence.

Hariri’s resignation, which Hezbollah opposed, has left Lebanon without a government as it faces the worst economic crisis since the 1975-1990 civil war.

“There must be serious work because time is tight and so is people’s patience,” he said.

Mass protests erupted across Lebanon on October 17 against plans to tax calls on WhatsApp and other messaging services.

The government announced a series of reform plans, but with no concrete steps, it failed to placate protesters or reassure multilateral lenders enough to release billions in badly-needed aid they had pledged.

Protesters said the sectarian political system on which the government is based, is problematic as it spawns patronage and clientelism. They are demanding a new government to be formed, comprised of technocrats unaffiliated with the political class.

Lebanon’s political system guarantees political representation for all 18 sects in the country, a legacy of French colonial rule. Seats in the cabinet and the parliament are divided between Christians and Muslims.

Positions in the public sector are also divided among religious groups.

Meanwhile, Lebanese banks, which had been closed since October 18, reopened on Friday, with queues outside the buildings and customers encountering new curbs on transfers abroad and withdrawals from US dollar accounts.

Though no formal controls were imposed, banks told customers they could only transfer funds abroad in particular circumstances such as repaying loans, education, health, family support or commercial commitments.

The Lebanese pound strengthened against the US dollar on the parallel market that has emerged in recent months, three dealers said.

The central bank had promised not to impose capital controls when banks reopened, measures that could hamper the currency inflows and investment that Lebanon badly needs.

Asked about steps being taken by banks, banking association chief Salim Sfeir said: “I would not call it restrictions but rather efforts by the banks to accommodate all customers, given the pressure resulting from closing for two weeks.”

“We stand ready to adjust any measure taken, once the situation in the country is back to normal,” he told Reuters. 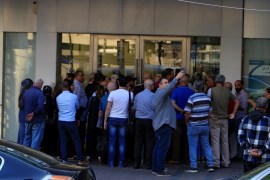 Orderly queues reflect determination by many Lebanese to return to business as usual in the wake of mass protests. 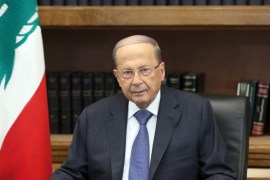