US President Donald Trump has confirmed the death of ISIL leader Abu Bakr al-Baghdadi in a military operation in Syria’s northwest Idlib province.

Trump said the leader of the Islamic State of Iraq and the Levant (ISIL or ISIS) died after running into a dead-end tunnel in the village of Barisha and ignited an explosive vest during the raid, killing himself along with three of his children.

“He was a sick and depraved man, and now he’s gone,” Trump said. “He died like a dog, he died like a coward.”

In a national address, the US president described a daring nighttime airborne raid by American special operations forces during which a large number of his companions were killed.

Al-Baghdadi’s 11 other children were “uninjured”, Trump said, and were left under the care of an unnamed third party.

Speaking from the White House’s Diplomatic Room, the president said that al-Baghdadi spent his last moments in utter fear and claims that he was “whimpering” and died as “a coward, running and crying”.

According to him, the US received immediate and positive identification on the body after an on site DNA test, and that the world is now a much safer place.

“His body was mutilated by the blast. The tunnel had caved in on it in addition. But test results gave certain immediate and totally positive identification. It was him,” Trump told reporters.

“The thug who tried so hard to intimidate others spent his last moments in utter fear, in total panic and dread, terrified of the American forces bearing down on him,” he said providing graphic details of al-Baghdadi’s final moments.

Trump said he watched the operation from the White House Situation room as it played out live “as though you were watching a movie.”

No US troops were injured in the operation, the US president said, adding that sensitive information was taken from the compound by US Special Forces.

Trump also warned that al-Baghdadi’s successors are now in US “sights”.

Late on Saturday, Trump had teased a major announcement, posting on Twitter that “something very big has just happened!” By the morning, he was thanking Russia, Turkey, Syria and Iraq, as well as Kurdish fighters in Syria for their support.

Planning for the operation began two weeks ago, Trump said, after the US gained unspecified intelligence on al-Baghdadi’s whereabouts. Eight military helicopters flew for more than an hour over territory controlled by Russian and Syrian forces, Trump said, before landing under gunfire at the compound.

Commenting on Trump’s choice of words, Marwan Bishara, Al Jazeera’s senior political analyst, said it was important for the US president to “make clear” to those who follow or might support ISIL that al-Baghdadi is a coward.

“It’s a way not only to kill al-Baghdadi physically, but also in terms of whatever memory there is of him … to kill his character,” he said.

“Clearly he’s going to be selling this point, about how he assassinated and ended the Islamic State and revived the American economy,” Bishara noted, referring to the upcoming US elections.

Al Jazeera’s Kimberly Halkett, reporting from the White House, also said that there is “no doubt” that Trump will “capitalise on this news as he campaigns for re-election in 2020, claiming Baghdadi’s death is a bigger deal than bin laden’s.”

Defense Secretary Mark Esper said the mission was to capture or kill the ISIL leader. While Trump had initially said no Americans were injured, Esper said two service members suffered minor injuries but have already returned to duty.

Trump’s national security adviser, Robert O’Brien, said al-Baghdadi’s remains would be dealt with in accordance with Islamic law and buried at sea in the same way that bin Laden’s were.

ISIL, which at one point controlled swathes of Syria and Iraq, committed atrocities against religious minorities and were behind attacks in several countries. They were defeated by the US and its allies in March this year.

Al-Baghdadi became arguably the world’s most wanted man, and had a $25m US bounty on his head.

He kept a low public profile in recent years, releasing only sporadic audio recordings. In a recording just last month, he called on members of the group to do all they could to free ISIL prisoners and women held in jails and camps.

That purported audio was his first public statement since last April, when he appeared in a video for the first time in five years. The video included images of the ISIL leader sitting in a white room with three others as he praised Easter Day bombings that killed more than 250 people in Sri Lanka.

Trump’s latest announcement comes as the US leader has been on the receiving end of bipartisan criticism in Washington following the recent pullback of US troops from northeastern Syria.

Critics fear that the decision will allow ISIL to regain strength after it had lost vast stretches of territory it had once controlled. But Trump reiterated his position and said his administration was not considering US withdrawal from Syria.

The Turkish Defence ministry said in a statement that Ankara and the US had exchanged information on a US-led raid in Syria’s Idlib. 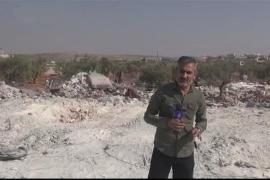 Exclusive: Footage from the scene of US raid that killed Baghdadi

Al Jazeera’s correspondent Alaa Eddine Youssef was one of the first journalists to reach the scene of the raid in Barisha village. 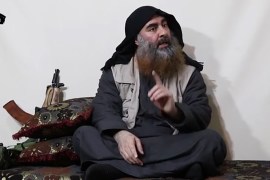 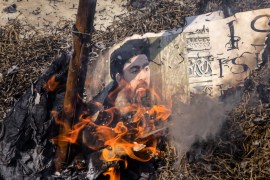 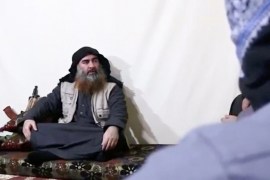 Unclear if al-Baghdadi was killed; President Trump to make ‘major statement’ at 13:00 GMT on Sunday.