United States Secretary of State Mike Pompeo said that a rift between Qatar and its Arab Gulf neighbours had gone on for too long, as the blockade against the Gulf nation entered its 19th month.

Speaking at a news conference in the Qatari capital, Doha, on Sunday, Pompeo argued that the continuing crisis between Qatar and the four blockading nations – Saudi Arabia, Egypt, the United Arab Emirates (UAE) and Bahrain – benefited their adversaries.

“We are all more powerful when we are working together and disputes are limited. When we have a common challenge, disputes between countries with shared objectives are never helpful,” he said at joint news conference with Qatari Foreign Minister Mohammed bin Abdulrahman bin Jassim Al Thani.

The US diplomat also said he would ask Saudi Crown Prince Mohammed bin Salman, known by his initials MBS, to ensure the killers of Washington Post columnist Jamal Khashoggi were held accountable for their crimes.

Saudi Arabia, the UAE, Bahrain and Egypt – all US allies – cut ties with Qatar in June 2017, accusing it of supporting “terrorist groups” and seeking closer ties to Saudi archrival Iran.

Qatar – also a US ally – denies the allegations and accuses the countries of impinging on its sovereignty.

The US, which at first appeared to back the boycott, has so far been unsuccessful in trying to get the countries to set aside their differences in order to focus on its regional priority – the fight against Iran.

Qatar’s relationship with Iran is complicated as it shares the world’s largest natural gas field with Tehran.

Gas has been responsible for transforming Qatar into one of the richest countries in the world since it first began exporting liquefied natural gas little more than 20 years ago. It has also agreed to increase gas production since the beginning of the crisis.

For Washington, turning the page on the crisis is essential for the successful launch of the Strategic Alliance of the Middle East (MESA), which is a NATO-style security pact that includes Gulf countries as well as Egypt and Jordan.

Pompeo arrived in Qatar on the latest leg of his Middle East tour. The secretary of state travelled to Doha from Abu Dhabi, where he met Crown Prince Mohammed bin Zayed on Saturday.

Pompeo travelled to Saudi Arabia later on Sunday, nearly three months after Khashoggi was murdered in the kingdom’s consulate in Istanbul.

At the news conference in Doha, Pompeo reiterated that Khashoggi’s murder was unacceptable and that he would work to get new answers from the Saudi crown prince.

“We will continue to have a conversation with the crown prince and the Saudis about ensuring the accountability is full and complete with respect to the unacceptable murder of Jamal Khashoggi,” Pompeo said.

“We’ll continue to talk about that and make sure we have all the facts so that they are held accountable certainly by the Saudis, but by the United States as well, where appropriate,” he added.

During Pompeo’s previous visit to Riyadh at the height of the Khashoggi affair, his broad smiles with Prince Mohammed had outraged some Americans.

Trump has said he wants to preserve the alliance with the Saudi kingdom, although the US Senate has clearly blamed Prince Mohammed for the murder. 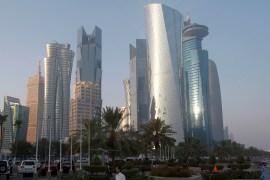 Understanding the blockade against Qatar