US President Donald Trump‘s decision in May to withdraw from the 2015 nuclear deal has paved the way for the reimposition of US sanctions against Iran beginning on Tuesday.

The US sanctions will come in two phases, based on the 90-day and 180-day wind-down periods set by the US Department of Treasury.

Counting from May 8, when Trump made his announcement, the first phase takes effect on August 7, after the 90-day wind down expires on August 6. The second and bigger phase, targeting Iran’s energy industry, will take effect on November 5.

The so-called “wind downs” are essentially grace periods given by the US government to companies, both American and foreign, to wrap up their business, terminate operations, and pull their money out of Iran.

Companies including GE and Honeywell were among the US companies operating in Iran that had to pull back their investments because of the sanctions.

Major foreign companies such as the French energy giant Total, and the Danish shipping line Maersk also started operations in Iran after the 2015 nuclear deal. But because of their presence in the US market, they too had to withdraw after Trump’s announcement. Or else, they would have risked getting penalised by the US government as well.

US Secretary of State Mike Pompeo has warned the United States “will hold those prohibited businesses in Iran to account”.

With the US sanctions against Iran in place, the following items and business transactions will be prohibited by the US as of Tuesday:

Airbus, a French-based company, which signed a $19bn contract to sell as many as 100 new planes to Iran Air, is also covered in the sanctions because more than 10 percent of the company’s jet parts come from the US. Airbus managed to deliver only three planes to Iran before the return of the sanctions.

In total, Boeing and Airbus lost most of its $39bn in contracts as both companies decided to cancel their contracts under threat of getting penalised by the US Treasury.

Meanwhile, the French-Italian company ATR managed to deliver on Sunday an additional five new ATR-72-600 planes, as part of its April 2017 contract to sell 20 new aircraft to Iran Air. In 2017, ATR delivered eight turboprop planes as part of the original deal worth $536m.

Licenses related to export and re-export of related plane parts and services to Iran are also prohibited, so the country would face enormous difficulty in upgrading or making fixes to its aging fleet.

Importation into the US of Iranian-origin carpets

According to the Tehran-based Financial Tribune newspaper, Iran was the biggest exporter of hand-woven carpets, cornering a 30 percent share of the world market in 2017.

Because the US is the number one market for Iranian rugs, the carpet industry could be hit hard, including the estimated two million Iranians employed directly or indirectly in the industry – from the weavers to the sellers.

The United States and Iran are the main competitors in the pistachio industry, controlling about 85 percent of yearly output.

The reimposition of the US sanctions may hurt Iran’s pistachio growers, but analysts said the ongoing trade war between the US and China could also prompt Beijing to impose tariffs on US goods including pistachios – a move that could benefit Iran.

In 2016 for instance, China was the biggest buyer of Iranian pistachios accounting for 50 percent of its sales.

From March 2017 to March 2018, Hong Kong, Vietnam and Germany were the top three purchasers of Iranian pistachios.

But with the US sanctions back in place, it remains unclear if many of those markets will remain open to Iranian pistachios.

For the first time in 25 years, about 10kg of Iranian farmed caviar worth $13,000 were exported to the US between 2016 to 2017, according to Tehran’s Financial Tribune. With the new US sanctions, it could take a few more years before the next caviar shipment will be shipped from Tehran to Washington, DC, or Los Angeles, home to hundreds of thousands of Iranian Americans.

But the market for Iranian caviar is not limited to the US. From March 2017 to October 2017, Iran reportedly exported 557kg of farmed caviar worth $1.37m.

According to Mehr News, Iranian production of caviar reached five tonnes in the fiscal year 2017 ending in March 2018, and of that amount, about 1.2 tonnes were exported.

Iran has about 90 breeding farms that produce caviar. According to LA Times, an ounce of caviar retails at $80.

Iran’s auto industry will also get smacked by the sanctions on Tuesday.

Iran is the 12th-biggest car market in the world with estimated sales of 1.6 million cars in 2017.

According to the International Organization of Motor Vehicle Manufacturers (OICA), Iran posted an 18 percent growth in sales last year.

Among the auto companies in Iran, the most popular brand is the French car Peugeot, which cornered 34 percent of the market. According to reports, PSA, the maker of Peugeot and Citroen, sold 445,000 vehicles in Iran in 2017.

PSA, however, announced it will exit the Iran market because of the US sanctions. PSA operated in Iran with its partner, Iran-Khodro.

Meanwhile, Renault, which controls five percent of the Iranian market, announced it will downsize, but not totally withdraw, from Iran. In 2017, Renault sold 160,000 cars. Renault does not operate in the US market making it possible for the company to stay in Iran.

Trading of Iranian gold and other precious metals are also prohibited under the reimposed US sanctions.

In 2017 an estimated 64.5 tonnes of gold were traded with Iran, according to Bloomberg, quoting data from the World Gold Council.

Demand for gold in Iran has also increased in the last few months, as Iranians try to keep their savings in precious metals instead of the local currency, rial, which has plummeted in value recently.

In the past, gold was also used to pay for Iran’s oil, to circumvent banking restrictions that prohibit currency payments to Iran.

With the new sanctions targeting cold, it could be much harder for Iran to get payments for its oil export once sanctions snap back in November.

The purchase or acquisition of US dollar banknotes by the Iranian government is also prohibited by the US government beginning on Tuesday.

That puts more pressure on the Iranian economy, as it tries to stop the decline of its currency, rial, against the dollar.

In May, the US stepped up pressure on Iran’s banking system, imposing sanctions on its central bank governor, Valiollah Seif, accusing him of covertly funnelling money to the Revolutionary Guard, which is also under US sanctions.

On July 25, Iranian President Hassan Rouhani fired Seif as central bank chief. Meanwhile, Seif’s deputy, Ahmad Araghchi, who was in charge of foreign exchange, was fired on August 4, and was reportedly detained on Sunday.

Other items targeted by the US are the direct and indirect sale, supply or transfer to and from Iran of graphite, a mineral that could be processed as an electrical conductor. It also includes a ban on raw or semi-finished metals, including aluminium, steel, coal and software.

The purchase or sale of the currency or the maintenance of significant funds or accounts outside Iran, denominated in rial, is also prohibited, as well as the purchase, subscription to, or issuance of Iranian sovereign debt.

All activities relating to contracts for activities eligible under the 2015 Iran nuclear deal are also revoked as of Tuesday.

In November, a second round of US sanctions against Iran will follow targeting its energy sector, as well as other related activities – including the shipping of oil from Iran and insurance related to its transport. 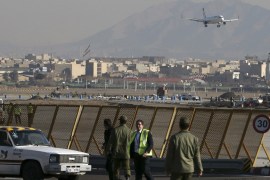 Iran getting new planes from Europe before US sanctions return 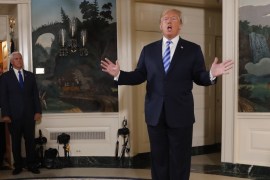