The US military has promised once again to keep Gulf waterways open to oil tankers as the Iranian president appeared to renew threats to close off the region.

Captain Bill Urban, a spokesman for the US military’s Central Command, told the Associated Press news agency on Wednesday that US sailors and its regional allies “stand ready to ensure the freedom of navigation and the free flow of commerce wherever international law allows”.

Iranian President Hassan Rouhani on Tuesday hinted Iran could halt regional exports if it is stopped from exporting oil after the US pulled out of the nuclear deal with world powers.

“The Americans have claimed they want to completely stop Iran’s oil exports. They don’t understand the meaning of this statement, because it has no meaning for Iranian oil not to be exported, while the region’s oil is exported,” the website, president.ir, quoted him as saying.

Iranian officials in the past have threatened to block the Strait of Hormuz, a major oil shipping route, in retaliation for any hostile US action against Iran.

Separately, a senior Iranian Revolutionary Guards commander said on Wednesday that they were ready to prevent regional oil exports if Iranian oil sales were banned by the US.

Praising Rouhani’s remarks, Major-General Qassem Soleimani said he was ready to implement such a policy if needed.

“I kiss your (Rouhani’s) hand for expressing such wise and timely comments, and I am at your service to implement any policy that serves the Islamic Republic,” Soleimani, commander of Quds force, in charge of foreign operations for the Revolutionary Guards, said in a letter published by state news agency IRNA.

In an interview with Al Jazeera, Nader Hashimi, director for Middle East Studies at the University of Denver, said US President Donald Trump’s hardline approach is forcing Iran to make drastic counter threats.

“What we are seeing right now is a result of unilateral American sanctions,” he said.

The US pulled out of a multinational deal in May to lift sanctions against Iran in return for curbs to its nuclear programme.

Washington has since told countries that they must halt all imports of Iranian oil from November 4 or face US financial measures, with no exemptions.

Sami Hamdi, Middle East analyst, told Al Jazeera, that Iran “is not the only country that is upset with US pressure” on the OPEC, or the cutting of oil exports from Iran.

The European Union, once Iran’s biggest oil importer, have vowed to keep the 2015 deal alive without the US by trying to keep Iran’s oil and investment flowing, but have acknowledged that US sanctions would make it difficult to give Tehran guarantees.

Iran’s Rouhani, who was in Vienna on Wednesday trying to salvage the nuclear deal, said that “if the remaining signatories can guarantee Iran’s benefits, Iran will remain in the nuclear deal without the US.”

Foreign ministers from China, France, Germany, Britain and Russia will meet Iranian officials on Friday in Vienna to discuss how to keep a 2015 nuclear accord alive. 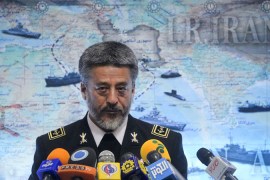 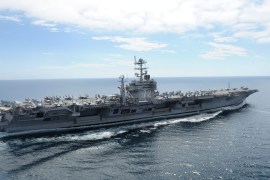 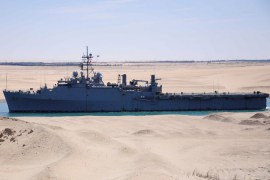 Iran will ‘block’ Strait of Hormuz if pressed

Tehran threatens to close the Strait of Hormuz, as the Washington sends another warship to the region.