Al Jazeera’s Investigative Unit has obtained an internal document from ACT for America, a powerful Islamophobic lobby group, which gives a rare insight into the organisation’s operations.

A booklet published by the movement, The Art of Chapter Leadership, includes advice on how to “map” kindergarten to 12th Grade school boards for suspected “Islamists”, and how to monitor Muslim activities at US universities.

The 129-page paper urges members of local chapters to “select a few [university] courses/professors that would have a likelihood of presenting biased viewpoints regarding Islamic Jihad, immigration, terrorism, etc”.

The booklet continues: “The two most highly suspect departments in which you will want to sign up for specific courses are as follows: The Political Science Department [and] Middle East Studies Department.

“These two departments have a real likelihood of being funded by the Saudis and will have professors who are generally pro-Sharia, anti-America and anti-Israel.”

ACT is one of the largest anti-Muslim groups in the US, which says it works to protect “national security”. Launched in 2007 by Brigitte Gabriel, it claims to have more than 750,000 members.

Over the past year, Al Jazeera investigated ACT and several other organisations and individuals who form the Islamophobia Inc industry in the US – a well-funded network propagating anti-Muslim racism.

ACT’s internal document recommends that members “volunteer in the classroom … so that you can monitor the lessons” in K-12 schools, and it suggests that parents “join the PTA in order to meet the teachers who are going to open up to you and tell you what is being taught.

“Make copies of any homework that is biased and untrue so that it can be used as evidence later with elected officials”.

Written in 2015 by Kelly Cook, the former executive director of ACT for America, the booklet cites as its central theme the need to “fearlessly speak out in defence of America, Israel and Western civilisation”.

Stressing the need to engage in “community mapping”, Cook warns of the growth of “madrassas” and Islamic schools across the United States.

“The Saudis are building madrassas around the world at an alarming rate,” he writes.

“If there is one in your area, this school needs to get your chapter’s full attention.”

The document advises members to conduct title searches on Islamic school properties and lays out steps for how to pressure authorities into closing down such facilities.

“If the county commissioners sense that this is developing into a highly controversial lease situation, the liability picture alone could swing their decision to drop the lease.

“Many local imams have direct ties to Radical Islamism,” the booklet warns.

In a welcome message, founder Gabriel writes that the US must “be protected from the rising tide of Islamism and jihad” and urges members to “drown out the foolish voices of political correctness”.

The pamphlet also stokes irrational fears, including “exhortations to overthrow our constitutional form of government and replace it with Sharia law or bullying and intimidation in the public square”.

The Muslim world, the document continues, expresses “hatred of and contempt for ‘infidels’ … visibly, fervently and frequently.

One chapter, titled Media Issues, urges extreme caution when dealing with journalists, instructing members to “never give an interview that can be edited”.

“Many reporters could become indignant and imply that you owe the public your side of the story.

“This is reporter-speak for ‘Please say something so that I can twist it out of context. I really want to make you look like a bigoted fool.’

“The best response to a reporter is usually ‘I am unavailable for comment at this time’,” the document advises.

ACT for America did not respond to Al Jazeera’s request for comment on the document.

It did provide statements to Al Jazeera in response to its Islamophobia Inc investigation, saying: “ACT for America has always welcomed and included members and supporters of all faiths, who stand united under the same flag of freedom, and support for Western values.”

“So for example, ‘all Muslims are terrorists. Muslims are incapable of fitting in in Western societies’.

“I think of ACT For America as sort of the shock troops and the ground troops for the Islamophobic network with the United States.

“They are the ones who actually have people on the ground in many, many communities doing anti-Muslim agitating”. 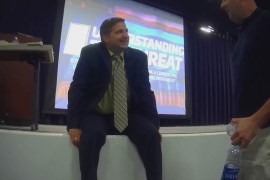 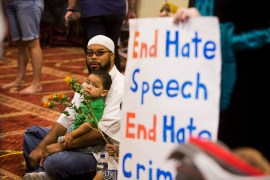 What is the business of hate? Islamophobia Inc. in the US 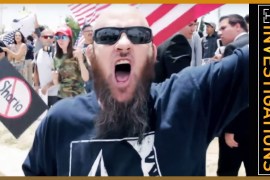