Another major storm system is bringing heavy snowfall to the central Plains and Upper Midwest of the United States.

Canada, too, is seeing large falls of snow across Ontario and southern Quebec.

Blizzard conditions have been experienced in some parts of the Midwest, and the storm is expected to sweep eastwards into New England, Labrador and Newfoundland in the coming days.

Residents of New England must be weary of spring snow by now. This will be the fourth major storm to deposit snow on the region since the beginning of March.

By contrast, warm air has been feeding from the Gulf of Mexico ahead of this system, resulting in some exceptionally warm weather along the eastern seaboard.

Of course, as this weather system sweeps through these cities will see a huge drop in temperatures. The capital, for example, will barely reach 12C on Tuesday.

Back to the snow, and falls of 35 centimetres have been reported around the Twin Cities of Minneapolis and Saint Paul, causing widespread disruption. In one of the ski resorts of northern Utah, more than 70cm of snow has fallen with more expected.

Winter storm warnings extend across much of the region and an Ice Storm Warning has been issued by the National Weather Service for western New York, including Buffalo and Rochester.

Further south, the active cold front brought thunderstorms and tornadoes to Louisiana and Arkansas. Other southern states will experience similar conditions in the next 24 hours.

The weather system is expected to clear the bulk of the east coast by Wednesday, although the weather looks far from settled through the rest of the week. 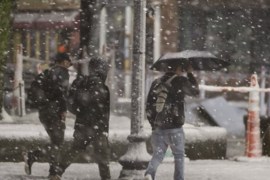 Northeastern US hit by second major storm in a week

Another nor’easter has brought more disruption from Philadelphia to New England. 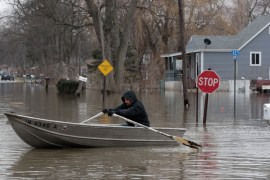 Major storm brings flooding to central and southern US

Despite what seems to be a cold winter, global warming feeds flooding in the central and southern US states.