The UN says “collective punishment of civilians is simply unacceptable” as the Syrian regime forces continue their brutal military offensive in the rebel-held area of Eastern Ghouta.

The UN said in a statement on Sunday that it was “deeply concerned” for the safety and protection of millions of civilians across Syria, a week after the UN Security Council passed a resolution calling for a 30-day ceasefire.

The UN’s regional humanitarian coordinator for Syria, Panos Moumtzis, in a statement said “in some cases, the violence has escalated”, referring to Eastern Ghouta – home to nearly 400,000 people – which has borne the brunt of regime attacks since February 18.

Instead of a much-needed reprieve, we continue to see more fighting, more death, and more disturbing reports of hunger and hospitals being bombed.

“Instead of a much-needed reprieve, we continue to see more fighting, more death, and more disturbing reports of hunger and hospitals being bombed,” the statement said.

“This collective punishment of civilians is simply unacceptable.”

At least 674 people, including over 150 children, are now believed to have been killed in the besieged enclave in the past two weeks.

Residents in the rebel-held enclave east of the capital, Damascus, are facing a dire humanitarian situation as food and other essential commodities are in short supply, despite repeated requests from the UN for emergency humanitarian access.

“The situation in Eastern Ghouta is in its worst period since the beginning of the siege until now,” said local journalist Firas al-Abdullah.

“Most people still live underground in basements and shelters, which has led to children having breathing problems and other health issues.”

A sixth day of a Russian-led five-hour “humanitarian pause” has gotten under way in the besieged area, but residents in the past have mocked the “ceasefire”, saying the bombing has never ceased.

The government forces have retaken 10 percent of Eastern Ghouta, said the Syrian Observatory for Human Rights (SOHR) late on Saturday.

The Britain-based monitor said the regime forces have recaptured four areas in the east and southeast of the enclave as well as two airbases.

“Regime forces and their allies have intensified their attacks on rebel positions in the past 48 hours,” Observatory head Rami Abdel Rahman said.

Speaking from Beirut, Al Jazeera’s Zeina Khodr said that rebels described the gains made by the pro-government alliance as “not significant.

“They have remained defiant and said they will continue fighting,” Khodr said.

“These areas [retaken by the Syrian government] are mainly farmland and small towns that are not heavily populated or built-up,” Khodr said.

“There is no doubt that there is less intensity in the bombardment, but, nevertheless, civilians continue to die,” she continued.

“This bombing campaign continues despite the criticism coming especially from Western nations.” 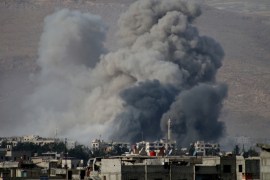 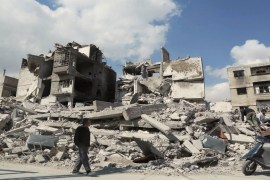 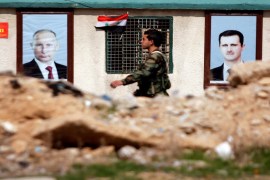 US condemns Syria’s ‘contempt’ for UN as Ghouta attack continues