Human rights groups have slammed a White House order that bans most transgender individuals from serving in the US military.

“There is simply no way to spin it, the Trump-Pence Administration is going all in on its discriminatory, unconstitutional and despicable ban on transgender troops,” Chad Griffin, the Human Rights Council president, said in a statement on Friday.

A memo, released late on Friday, laid out the new policy, which formalises a pledge first made by US President Donald Trump on Twitter to implement a ban.

“The policies set forth by the Secretary of Defense state that transgender persons with a history or diagnosis of gender dysphoria — individuals who the policies state may require substantial medical treatment, including medications and surgery — are disqualified from military service except under certain limited circumstances,” Trump said in the memo.

Despite objections from rights groups, as well as top military personnel and politicians on both sides of the aisle, Trump ordered the policy, claiming it was “developed through extensive study by senior uniformed and civilian leaders, including combat veterans”.

A similar ban, which reversed a policy shift started under his predecessor, President Barack Obama, has previously been blocked by federal judges in four separate cases, and is currently being challenged in court.

The American Civil Liberties Union (ACLU), which has won a case against the ban, said on Twitter the “policy effectively coerces transgender people who wish to serve into choosing between their humanity and their country, and makes it clear that transgender service members are not welcome”.

It added: “What the White House released tonight is transphobia masquerading as policy, for the sole purpose of carrying out President Trump’s reckless and unconstitutional ban. It undermines the ability of trans service members to serve openly and military readiness as a whole.”

Matt Thorn of OutServe-SLDN, a group dedicated to LGBTQ equality in the military, said in a statement that “this policy is a thinly-veiled and feeble attempt by the Trump-Pence administration to justify the unnecessary discrimination of qualified patriots in order to advance their own personal agendas and in defiance of the administration’s top military leadership”.

He added that the plan is “riddled with blatant animus, bigotry, and ignorance but conveniently void of any foundational bases or facts”.

Many, including several trans veterans, also took to Twitter to under #ProtectTransTroops to condemn the ban and show support to the trans community.

It's yet another day that Donald Trump and Mike Pence are exploiting our military for political points. As a military veteran and proud transgender woman, tonight hits home for me. It's personal. So, let's be absolutely clear about what this means… (thread)#ProtectTransTroops

My great grandfather was a two-star general who served with Patton. My grandfather a Marine. Can’t believe either of them would have thought me unfit to serve. Today is another disgraceful day for this country under @realDonaldTrump. #ProtectTransTroops

As a veteran, I stand with my transgender brothers & sisters in arms who only want to serve our country.

We should be honored to have them defend us, not banning them.#ProtectTransTroops pic.twitter.com/PpCbPXRUhi 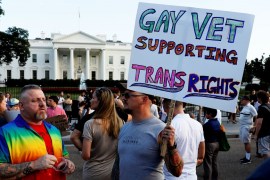 LGBTQ activists welcome decision by a US district court as a victory for transgender rights. 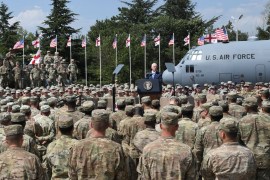 US president’s ban described as ‘disrespectful and dishonuorable’ and a threat to national security. 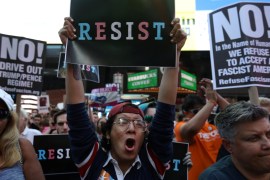