As Egypt gears up for its third election since the Arab Spring, Al Jazeera takes an in-depth look at the country’s economy.

The vulnerability of Egypt’s political system has greatly determined the day-to-day life for its citizens, directly affecting their disposable income.

Widespread condemnation over the decline of the economy and President Abdel Fattah el-Sisi’s internal policies led many to call for a boycott of this year’s election.

But how will the economy shape the decision-making process of Egyptians, who are expected to vote starting on Monday?

Over the last two decades, inflation in Egypt has seen some highs and lows. Since the military coup in 2013 and the election of President el-Sisi in 2014, inflation has increased from about 12 percent to its peak at around 33 percent in mid-2017. It is currently around 15 percent.

For years, it has been a policy of the Egyptian government to subsidise the cost of living of its citizens. It has ensured that the basic needs remain affordable for all, while reducing incidents of infant mortality and malnutrition.

Meanwhile, unemployment in the country has gradually decreased since the Arab Spring, even as it remained in the double digits. According to a study by the Brookings Institute, the country’s unemployment is driven by population growth. From 17.4 million youth population (ages 15-29) in 1998, it has increased to 22.2 million in 2006.

There are an estimated 10 million Egyptians living overseas, and their remittances have helped the country stay afloat. Dollar remittance hit a record high amount at the end of 2017, up almost 40 percent compared with the previous year.

The literacy for women remains far below men, with an almost 20 percent difference between the two genders. The overall average literacy rate at the end of 2015 which is approximately 75.8 percent, based on the Trading Economics report.

With additional research by Balarama Chambers in Doha. 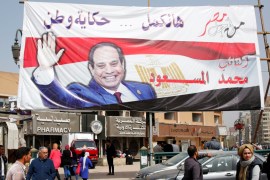 Egypt’s 2018 presidential ‘election’: What you need to know