The toughest US abortion law has been blocked by a court in Mississippi, less than 24 hours after it was signed into law.

Tuesday’s move came after a legal challenge filed by the Center for Reproductive Rights on behalf of the state’s only abortion clinic and a doctor who practises there.

Governor Phil Bryant had on Monday signed the bill into law, banning all abortions after 15 weeks of gestation, including in cases of rape or incest.

The only exceptions to the rule are medical emergencies or severe foetal abnormalities.

According to the challenge, the law is unconstitutional because a “state may not ban abortion before viability” as was established in “decades of well-established, clear precedent under the US Constitution.

“Mississippi politicians have shown once again that they will stop at nothing to deny women this fundamental right [access to safe and legal abortion care], targeting the state’s last remaining clinic in defiance of the US Supreme Court and decades of settled precedent,” Nancy Northup, president and CEO of the Center for Reproductive Rights, said in a statement.

In a video posted on social media at the signing ceremony on Monday, Bryant said: “We are saving more of the unborn than any state in America, and what better thing can we do?”

He predicted at the signing ceremony that the state would “probably be sued” over the bill.

“That’ll be fine with me,” he added. “It’ll be worth fighting over.”

According to the lawsuit, filed within an hour after Bryant signed the bill, “in a normally progressing pregnancy, viability typically does not occur until at least 23 weeks lmp [last menstrual period].

“Viability is a determination that must be made by a physician, and it will vary from pregnancy to pregnancy, depending on the health of the woman and the fetus,” the complaint said, adding “no fetus is viable after 15 weeks of pregnancy”.

The sole clinic offering abortions in the state performed 78 abortions after 14 weeks and six days gestation last year, according to the suit.

The Center for Reproductive Rights pointed to several other states – including Arizona, Arkansas and North Dakota – that have passed similar laws, which have been struck down in the courts.

Bryant is known to be an outspoken critic of abortion, saying in 2014 that he wanted “to end abortion in Mississippi”.

Mississippi is one of the poorest states in the US. It has the highest infant mortality rate and is ranked lowest for child and infant medical care, according to a 2018 study by America’s Health Ratings, a research organisation.

The American Civil Liberties Union (ACLU) – Mississippi had previously called the bill a move to “put policy ahead of a woman’s choice about her own reproductive health”.

Earlier this month, ACLU Mississippi said: “The real agenda from some state legislators is to ban abortion outright. Since they can’t, they’re using this restrictive bill to put abortion out of reach.”

The law comes at a time when reproductive rights advocates say there is an concerted effort by administration of US President Donald Trump to clamp down on women’s health.

While at the federal level, Congress has failed repeated attempts to pass a law banning abortion after 20 weeks, as well as cut funds for Planned Parenthood, the Trump administration has implemented several rules.

These include reinstating and expanding the Global Gag Rule and appointing prominent anti-abortion rights activities to high-level posts within the government, that rights advocates say are a detriment to women’s health. 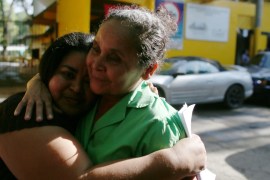 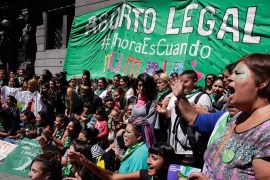 ‘Historic moment’: Abortion to be debated in Argentina’s Congress 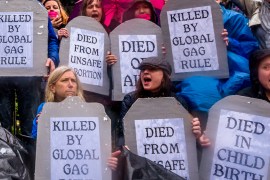 An insight into the far-reaching consequences of Donald Trump’s ban on US funds going to foreign aid organisations that promote or perform abortions.