President Donald Trump paid his last respects on Monday to the late George HW Bush, setting aside his animosity to the former president’s clan, whose family members he had derided in the past.

Bush died on Friday at age 94, at his home in Houston.

Trump, accompanied by First Lady Melania Trump, made a brief visit to the US Capitol rotunda, where Bush’s flag-draped coffin was resting as part of tributes to honour the 41st US president.

Trump saluted, and they stood at Bush’s coffin for about a minute. They exited the rotunda with little fanfare.

Trump had feuded with members of the Bush family, deriding the late president’s sons, calling George W Bush “the worst president ever”, and referring to Jeb Bush, former governor of Florida and rival in the 2016 Republican nomination, as “weak”.

Members of the Bush family and dignitaries had gone, when the president was driven from the White House up to Capitol Hill.

The elder Bush never warmed to Trump, and he had let it be known that he did not vote for him in 2016. Trump himself has criticised the elder Bush on the campaign trail.

But on Monday, Trump wrote members of Congress to hail Bush as a man who “led a life that exemplified what is truly great about America”.

“President Bush worked selflessly throughout his long life to bring about a world of justice and lasting peace,” he wrote.

The White House also extended an invitation to Bush’s family to stay at Blair House – the president’s guest house – while they are in Washington for events surrounding to his funeral.

Military pallbearers carried the flag-draped coffin into the rotunda as the sun set on Washington on Monday.

The sombre ceremony was attended by his son George W Bush – the nation’s 43rd president – and other relatives, dignitaries and more than 100 members of the House and Senate.

Bush is the 12th US president to lie in state in the rotunda. Just three months earlier, the honour was accorded to Senator John McCain, a former Republican presidential nominee who died of brain cancer.

Bush will be honoured at a state funeral service at the cathedral on Wednesday, which Trump has declared a national day of mourning. He is expected to attend that memorial.

Bill Clinton will be among the living former US presidents to attend, along with dozens of foreign leaders, including Germany’s Angela Merkel.

Only the second president to see his son follow him to the Oval Office, the senior Bush will be buried on Thursday in Texas, next to his wife Barbara, who died in April, and their daughter Robin who died of leukaemia at age three. 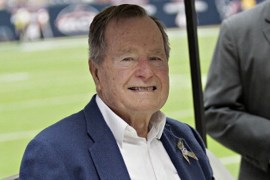 Bush successfully reversed Saddam’s invasion of Kuwait, prompting an era of US military adventurism in the Middle East. 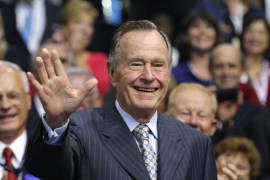 The 41st US president and patriarch of the Bush political dynasty oversaw the Gulf War and the end of the Cold War. 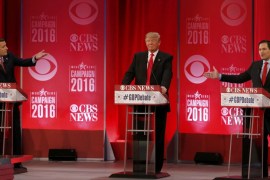