Buenos Aires, Argentina – Hundreds of thousands of anti-capitalist and other protesters marched against the G20 summit through the Argentine capital Buenos Aires on Friday.

Protesters seemed undeterred by a number of security measures put in place by the government, including the closure of public transportation in much of the city.

A 12-square-kilometre area around the convention centre where the leaders of the world’s top economies were meeting was cordoned off, keeping demonstrations about five kilometres away from the event.

“We will march up to the security fence so the functionaries who are inside a fence that surrounds them … can see there’s resistance from the people,” said Sebastian Dominguez, of the Argentine Regional Workers’ Federation, an anarcho-syndicalist organisation.

Dominguez, along with thousands of others who attended the march, protested against the G20’s failure to adequately address a broad range of issues, including climate change, poverty and hunger.

“This G20 won’t talk about migration, austerity and the adjustment measures we’re facing here in Argentina and that are being applied in Europe,” said Daniel Catalano, secretary-general of ATE Capital, an Argentine trade union.

Paulo Neves, who travelled from Brazil to protest against the G20, told Al Jazeera, “We are marching in support of our comrades against the G20 and against neoliberalism in Latin America.”

Some protesters shouted “Get out G20, Get out Trump” as the march arrived in the square outside Congress.

“This circus that has kicked off in Buenos Aires today isn’t tackling improving the lives of the vulnerable or the oppressed in this country,” said Carlos Ortega, general secretary of social security union SECASFPI.

Also high on the protesters’ agenda is the economic crisis in Argentina and how it is affecting ordinary people.

Pablo Ruiz, who has worked in the streets selling things since he was five years old, told Al Jazeera he was marching because he was angry.

Several social groups also voiced concerns about extrajudicial killings and other persecutions of activists in advance of the summit.

Two activists from the Popular Confederation for Economy Workers (CTEP) were killed the week before the summit. Rodolfo Orellana was shot during a land occupation on the outskirts of Buenos Aires and Marcos Soria was shot in a separate incident in the city of Cordoba.

Organisations including Confluence G20 IMF Out and police brutality monitoring organisation Correpi have said the police were responsible for both killings.

A spokesperson for the Buenos Aires Provincial Ministry of Security told Al Jazeera that an investigation is ongoing.

“The issue of who fired the shot and what weapon they used is under investigation because initial impressions suggest that it was a low-calibre weapon and the police force don’t use those,” the spokesperson said.

Cordoba Provincial police had not responded to Al Jazeera’s request for comment at the time of publication.

Argentine protesters are also demanding justice for Santiago Maldonado, who disappeared while police were dispersing a protest in Chubut province in August 2017. Three months later, his body was found in a river. His death prompted protests across the country. 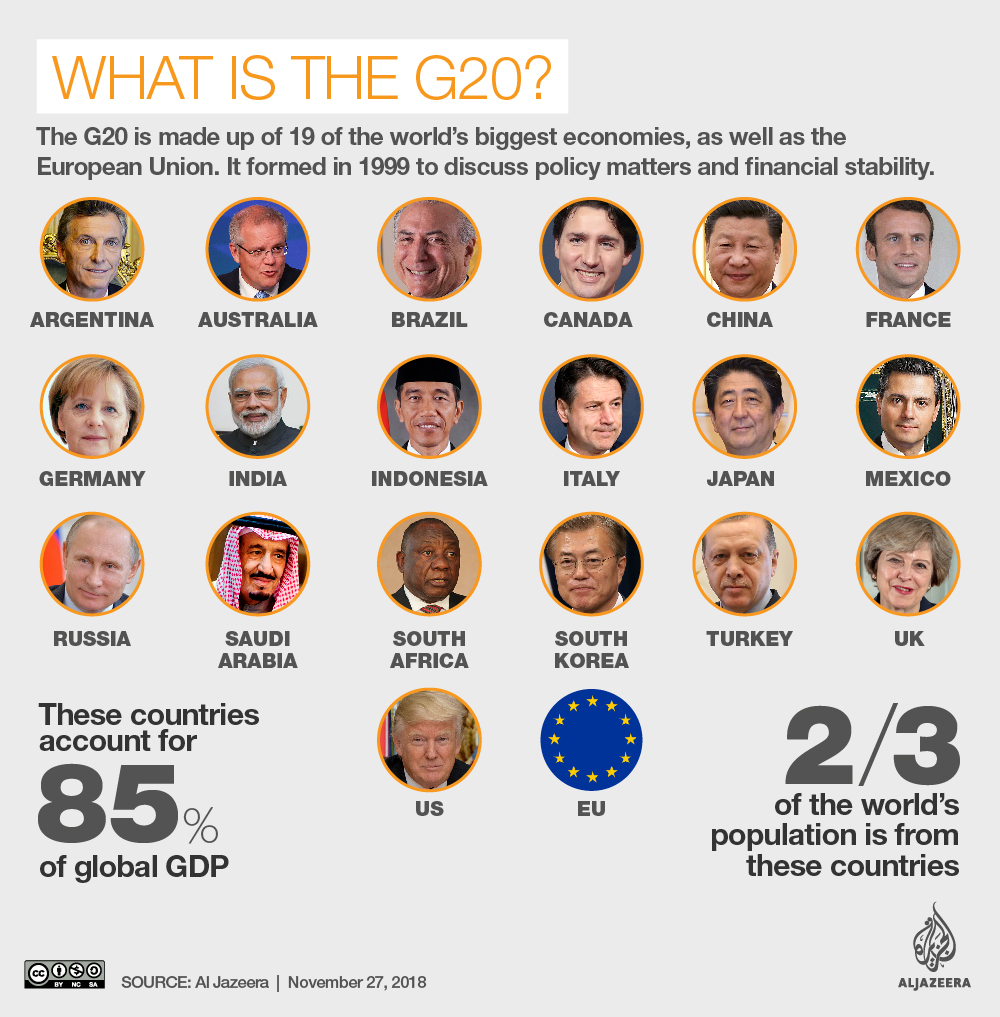 Meanwhile, the Argentine Committee in Solidarity with the Palestinian People also told Al Jazeera that it rejected the visit of Saudi Crown Prince Mohammed bin Salman because of his role in the bombing of Yemen.

The group also highlighted the involvement of the United States and the United Arab Emirates in the Yemen war.

“Tens of thousands of Yemenis have been killed and half the population has been left on the brink of famine,” the organisation said in a statement emailed to Al Jazeera.

Others who protested against the attendance of Prince Mohammed called for justice for Saudi columnist Jamal Khashoggi, who was killed on October 2 in kingdom’s consulate in Istanbul. Saudi officials have dismissed allegations that Prince Mohammed had knowledge of the operation to kill Khashoggi, but Turkey has consistently hinted at high-level Saudi involvement, stopping short of accusing any senior Saudi royal. US intelligence has also reportedly linked the crown prince to the murder.

“Countries who covered up the murder [of Khashoggi] are also responsible for Yemen, and now they’re here with diplomatic immunity,” said Severino Ramon of the Leninist Trotskyist international faction.