Hundreds of troops have been dispatched to clean up destroyed villages and washed out roads as flash floods and landslides killed at least 12 people in central Vietnam.

Heavy rains have been pounding the central Khanh Hoa province over the past few days since tropical depression Toraji blew in from the South China Sea, triggering landslides that wiped out houses and destroyed a small reservoir.

At least a dozen people have been killed so far, while a search was ongoing for several others, an official from the provincial disaster office told AFP news agency, refusing to be named.

“We have mobilised hundreds of army troops to help people restore lives and clean up damaged roads,” he said.

The main highway linking north and south Vietnam was temporarily blocked and some railway routes were interrupted, while images on state media showed destroyed houses buried under debris and vehicles submerged in floods.

Toraji is the eighth tropical storm to hit Vietnam this year. The country is routinely hit by heavy rains during typhoon season from May to October.

Toraji aimed for Cam Rahn Bay, about 40km south of Nha Trang, a resort around the mouth of the Cai river in south-central Vietnam.

The centre of the depression crossed the coastline a little after dawn on Sunday. The winds were not strong, but the slow-moving Toraji allowed torrential rain to fall for hours on end.

Nha Trang has an average November rainfall of 332mm. As the rainbands from Toraji swept in, Nha Trang measured 379mm of rain, most of it falling during Sunday’s daylight hours.

The tropical storm may hit the Bay of Thailand to grow into a significant rain threat to the southern part of the country by Wednesday.

Toraji is part of a chain of potential tropical cyclones, stretching eastwards into the western Pacific.

The next unnamed typhoon is likely to develop as it approaches the southern Philippines during the week and may head for southern Vietnam the next weekend. 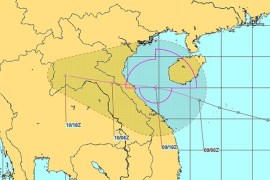 Tropical Depression 23W has developed in the South China Sea threatening floods across parts of Indo-China.