The weather has fallen quiet across Japan but in the wake of Typhoon Trami, which left four people dead, the next storm is gathering pace in the northwest Pacific.

According to the Joint Typhoon Warning Center, the storm has reached its maximum intensity and is expected to gradually weaken over the next few days.

Kong-rey is now packing sustained winds of 260 kilometres per hour with gust nearer 315km/h. This is equivalent to a Category 5 Atlantic hurricane on the Saffir-Simpson Scale.

There is still some uncertainty as to the exact track that this next system will take but general thoughts are that it will pass to the east of China around Friday.

It is expected to stay offshore but damaging winds and flooding rains along with heavy seas are likely in and around the Shanghai area. The storm is forecast to move into the East China Sea with winds around 150km/h.

Latest projections then have the system making landfall near Busan in South Korea late Saturday into Sunday. At this stage, it could still be a typhoon but is more likely to be a strong tropical storm with winds down to 115 gusting 140km/h.

Kong-rey will then move into the Sea of Japan, bringing further heavy rains across the saturated fields and mountains of Kyushu and southern Honshu. 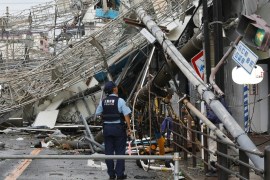 At least 10 dead while thousands stranded at Kansai airport being evacuated in the wake of strongest storm in 25 years. 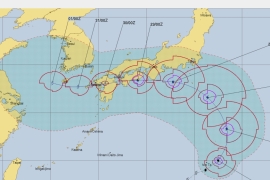 Hard on the heels of a record heatwave, Typhoon Jongdari remains on course to hit Japan’s mainland.