Mawar lost strength before hitting the coastline, but its torrential rain fell on already saturated ground.

The storm came ashore between the cities of Shanwei and Shantou, approximately 125 kilometres to the east of Hong Kong.

The compact nature of Mawar limited its most severe impacts to a small portion of southeastern China, but many parts of the Guangdong coastline saw very heavy downpours.

Many places reported at least 80mm of rain from the storm and Macao, which was badly hit by Typhoon Hato, was inundated by 159mm.

As the storm approached the region, high-speed trains between Shenzhen and Chaosham, Xiamen and Hangzhou were suspended, according to the Shenzhen Daily.

Although the winds of the storm were not too powerful, flooding was a major concern because Mawar followed so quickly after two other storms, Typhoon Hato and Tropical Storm Pakhar.

Typhoon Hato slammed into Macau on August 23, killing 10 people and injuring 244. The storm forced the grounding of hundreds of flights and cut water and power supplies to much of the casino hub.

In Hong Kong, economic losses were estimated to be as high as a billion dollars.

Now Mawar is over land it is expected to disintegrate readily, with the heavy rain slowly easing over the next few days. 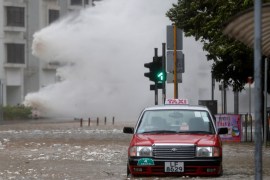 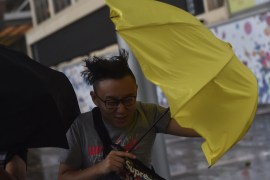