More than 34,000 people have fled from a rumbling volcano on the resort island of Bali as the magnitude of tremors grows, prompting fears it could erupt for the first time in more than 50 years.

Indonesia‘s disaster mitigation agency said on Sunday the number of people fleeing their homes surrounding the volcano had tripled since Friday amid growing alarm that Mount Agung could erupt at any moment.

“The evacuation process is ongoing and we expect the number of evacuees to continue to rise,” the agency spokesman Sutopo Purwo Nugroho told AFP news agency.

The volcano, located about 75km from the tourist hub of Kuta, has been rumbling since August.

Officials announced the highest possible alert level on late Friday following the increasing volcanic activities and urged people stay at least 9km away from the crater.

“I am actually very worried to leave, I left my cows and pigs at home because we were ordered to vacate our village immediately,” villager Nyoman Asih who evacuated with her entire family told AFP.

The international airport in Bali’s capital, Denpasar, was anticipating possibilities of airport closure but no flight schedules had been affected as of Sunday.

The airport has prepared buses and trains to divert passengers to alternative hubs in neighbouring provinces if the mountain erupts.

The Indonesian Centre for Volcanology and Geological Hazard Mitigation said tremors happened less frequently on Sunday but were stronger than in previous days.

“The mountain has not erupted until now, the earthquake happens less frequently but the magnitude is getting stronger,” Gede Suantika, a senior volcanologist at the agency told AFP. 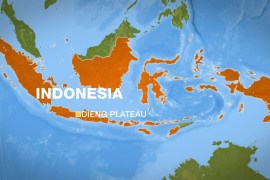 A helicopter heading to evacuate residents near an erupting volcano crashed near Java’s Dieng Plateau in Indonesia. 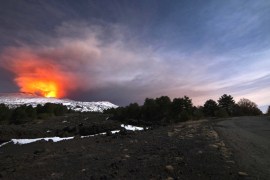 Magma flowing into snow causes a violent explosion that sends stones and rocks flying into the sky above Sicily.