Yangon, Myanmar – As a humanitarian crisis deepens in western Myanmar, the military says it has killed at least 370 Rohingya “fighters” over the past week in Rakhine state.

According to a statement by the office of Myanmar’s military commander in chief, Min Aung Hlaing, the army was involved in 90 armed engagements with fighters of the Arakan Rohingya Salvation Army (ARSA) from August 25-30, including alleged attacks on police outposts and a military base in Maungdaw district of Rakhine.

At least 15 members of Myanmar security forces were also killed over the same period, including two government workers, and one soldier is missing, late Thursday’s army statement said.

Al Jazeera was unable to independently verify the army’s claims.

“The humanitarian situation is deteriorating rapidly and I am concerned that many thousands of people are increasingly at risk of grave violations of their human rights,” the UN Special Rapporteur on the human rights situation in Myanmar, Yanghee Lee, said in a statement on Friday.

“The worsening cycle of violence is of grave concern and must be broken urgently.”

The UN estimates that nearly 40,000 people have crossed into Bangladesh in the area around Cox’s Bazar, while thousands more remain stranded between the two countries.

READ MORE: ‘They’re firing their guns at us and burning our homes’

The stream of people fleeing violence has increased rapidly with witnesses telling Al Jazeera the army has fired indiscriminately on Rohingya Muslims in villages.

Hundreds of villagers have been reported missing and hundreds of others are feared dead.

Several refugees – including women and children – have died while making the perilous journey to Bangladesh, which is struggling to cope with the influx and has reportedly turned some Rohingya Muslims away.

Tensions were reignited on August 25 when ARSA fighters claimed responsibility for attacks in Rakhine. While the group announced “defensive actions” on Twitter, it did not disclose the number of fighters involved or targets killed.

Foreign governments and rights organisations fear Rohingya villages are being subjected to collective punishment after the group’s attacks on police posts and an army base.

The latest bout of violence extends a decades-long conflict that has seen the displacement of more than 140,000 of Myanmar’s 1.1 million Rohingya located along the country’s western border.

Myanmar’s Rohingya are often described as the world’s most persecuted minority, and their ethnic status is not recognised by the government.

“The international community needs to demand Aung San Suu Kyi and her civilian government stop these clearance operations and permit humanitarians, journalists and researchers into these areas to assess the situation and hold those committing abuses accountable,” Robertson said.

The conflict has proved to be an insurmountable test for the government of Aung San Suu Kyi, who faces growing criticism from the international community over her handling of the situation.

“The situation is dire,” said Matthew Smith, CEO of rights group Fortify Rights. “Mass atrocity crimes are continuing. The civilian government and military need to do everything in their power to immediately prevent more attacks.”

In addition to the military’s announcement, state media on Friday said that more than 150 fighters staged an attack on security forces near Rakhine’s Indin village, resulting in the death of one attacker.

Recent fighting has brought back memories of events in 2012 when communal violence in Rakhine’s capital, Sittwe, led to the deaths of 200 people.

The fighting has also spurred growing anti-Rohingya rhetoric from Buddhist nationalists, including monks, a sentiment mirrored by their followers on social media.

The rhetoric has prompted a wave of hate speech against journalists and NGO workers, continuing a campaign that last month saw several aid workers in Rakhine resign over death threats on social media.

“I don’t support the violent ways of either side,” said 39-year-old Rohingya activist Ro Nay San Lwin. “There are Rohingya farmers fighting with knives. If we continue to fight the Burmese military, the Rohingya will no longer be in Arakan and that is my biggest fear.”

The wave of attacks follows the release of a report by the Rakhine Advisory Commission, led by former UN secretary-general Kofi Annan, looking into solving the sectarian strife. 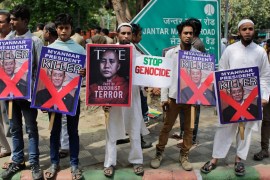