The ODM’s Odinga, the country’s former prime minister, will challenge President Uhuru Kenyatta of the Jubilee party in a closely contested vote on Tuesday, which many fear could see violence.

In an interview with Al Jazeera, the former Kenyan prime minister said his party has put in place efforts to stop an alleged plot to tamper with results.

“There are attempts to manipulate the results,” Odinga said. “The only way Jubilee can win this election is by rigging.

“They have no other way. We are more than confident that we are going to get a decisive victory on Tuesday.”

The veteran politician is running for the presidency for a fourth time.

More than 1,000 people were killed in post-election violence and some 600,000 were displaced.

The chaos stopped after Kibaki and Odinga agreed to form a power-sharing government.

“Any attempt to try to cheat Kenyans of their victory will not be tolerated this time around,” Odinga said.

“They [opposition] wasted their time on press conferences and fighting the Independent Electoral and Boundaries Commission (IEBC) in courts and now they have realised that they are headed for a defeat,” Kenyatta told the crowd.

“That is why they are bringing up these baseless rigging claims,” he said.

The rigging claims come a week after the disappearance and murder of a senior electoral official.

The opposition, National Super Alliance (NASA), said the death of Chris Msando is linked to his role in the electoral body.

Msando who was the head of the election body’s information, communications and technology.

OPINION: Kenya’s election: What is at stake for the region?

“It is telling that the key person who was perhaps holding very vital passwords has been eliminated at this delicate time,” NASA’s Musalia Mudavadi told a press conference last week.

Police said in a statement that they were treating the death as a “crime of grave proportions and a … special homicide team has been set up to investigate the murder”.

Polls have shown the election to be too close to call.

More than 19 million have registered to cast their vote in Tuesday’s election. 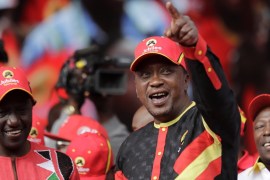 A look at fake news, inaccurate polls and misleading ads in the run-up to Kenya’s vote. Plus, Omar Khadr and the media. 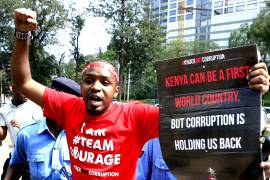 Murder of election chief casts shadow over next week’s elections as many Kenyans take to streets to demand justice.