Spanish police early on Friday said they killed the alleged perpetrators of a suspected “terrorist attack” in the town of Cambrils, south of Barcelona.

Six civilians and one police officer were hurt when a car drove into people in the Spanish seaside resort of Cambrils early on Friday, the regional government said, just hours after a similar deadly attack in nearby Barcelona.

Two of the people injured were in a serious condition, emergency services in Catalonia said.

Police shot dead five attackers in Cambrils – 120 kilometres south of Barcelona – and said they were “working on the hypothesis that the terrorists shot dead in Cambrils could be linked to what happened in Barcelona”.

The news came hours after police launched a manhunt for the driver of a van who ploughed into crowds of people on one of Barcelona’s busiest thoroughfares, killing 13 people and injuring 100.

Spain’s public broadcaster, RTVE ran a video of Cambrils’ promenade in which volleys of gunshots could be heard while sirens wailed and people’s screams could be heard.

The Islamic State of Iraq and the Levant (ISIL, also known as ISIS) group said via its affiliated Amaq news agency on Thursday that its “soldiers” were responsible for the earlier attack on Las Ramblas, a popular tourist spot in Barcelona.

Catalan police chief Josep Luis Trapero said two men had been arrested in connection to the attack, a Moroccan and a Spanish national from the North African Spanish enclave of Melilla.

However, a third man believed to have been the driver of the van, was still on the run, Trapero told reporters.

The attack on Las Ramblas was “obviously a terrorist attack [carried out] with the intent to kill as many people as possible,” he said.

He also said that an explosion that killed one person and destroyed a house in the town of Alcanar, 200km south of Barcelona, on Wednesday night, was “clearly” linked to the attack.

However, he said that so far there was no evidence that another incident, in which police shot dead a man after he tried to evade a checkpoint while leaving Barcelona hours after the attack, was connected.

Aki Peritz, a former CIA counterterrorism analyst, told Al Jazeera it was becoming increasingly clear that the Barcelona van-ramming was not a lone attack.

“Once you have a group of individuals working together that means that there is a cell and that they have some sort of direction,” he said.

Peritz said it seemed likely the incidents in Barcelona, Alcanar, and Cambrils were linked.

“I think so because ISIS, like al-Qaeda, likes the spectacular. For them to just do a one-off attack is not really their calling card. And so the fact that you have multiple attacks, over multiple areas – taking the ability of the authorities to react to any specific place – is one of the hallmarks of ISIS and really of al-Qaeda,” he said.

“It overwhelms the system and the fact that they can pull off a complex attack is the thing that makes them a pretty lethal and aggressive adversary.”

“We are not only united in mourning. We are above all united in the resolute will to defeat those who want to take away our values and our way of life,” he said.

Europe has been hit by a series of deadly attacks using vehicles over the last two years including deadly incidents in Nice, Berlin and two in London.

Spain’s worst attack was in March 2004 when 191 people were killed by bombs planted by al-Qaeda on commuter trains in Madrid. 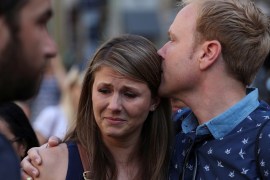 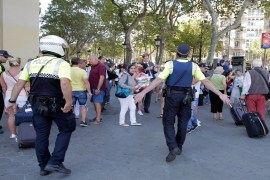