Protests turned violent in Charlottesville, Virginia on Saturday, as white supremacists clashed with counter-demonstrators, and a car ploughed into the crowd of anti-racist and anti-fascist protesters. Here is what we know. 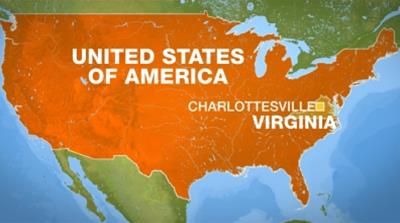 This took place in Charlottesville, a university town of 46,000 people, in the state of Virginia in the United States.

Charlottesville has become a focal point of the resurgent white supremacist movement after officials there voted to take down a statue of the Confederate General Robert E Lee.

Is Charlottesville now safe? What is the latest on the ground?

Police intervened after clashes broke out and dispersed the crowd, and Governor McAuliffe declared a state of emergency.

The governor’s office also urged all members of the community to stay home on Saturday evening.

On August 12, US President Donald Trump condemned the clashes “on many sides” in Charlottesville in a Twitter post:

We ALL must be united & condemn all that hate stands for. There is no place for this kind of violence in America. Lets come together as one!

But on Tuesday, he seemed to backtrack, insisting that there was “blame on both sides” including by anti-fascist protesters.

His comments have drawn widespread criticism from many on all sides of the political spectrum.

The remarks were also welcomed by former Ku Klux Klan leader David Duke, who tweeted: “Thank you President Trump for your honesty & courage to tell the truth.”

Senator Bernie Sanders condemned the clashes and said, “it was a reprehensible display of racism and hatred”.

The white nationalist demonstration in #Charlottesville is a reprehensible display of racism and hatred that has no place in our society.

Mr. President – we must call evil by its name. These were white supremacists and this was domestic terrorism. https://t.co/PaPNiPPAoW