The 76-year-old, a top adviser to Pope Francis, returned from Rome earlier this month to face multiple charges in Melbourne relating to offences allegedly committed decades ago when he was a senior cleric in Australia.

Details of the charges have not been made public although police said they involved “multiple complainants”. The former Sydney and Melbourne archbishop has always maintained his innocence.

Pell has not yet entered a plea. On Wednesday, his lawyer Robert Richter told the court Pell planned to plead not guilty at a future court date.

Pell, looking sombre and frail, made no comment as he was escorted by a group of police officers through a crush of cameras, reporters and photographers outside the Melbourne Magistrates Court, which hears hundreds of cases a week for alleged crimes ranging from theft to murder.

He was not required to attend the brief hearing, which allows lawyers to discuss when the prosecution brief can be handed over and set out the next dates in what is expected to be a lengthy court process.

But Australia’s most powerful Catholic opted to appear, having previously vowed to defend himself and clear his name after a two-year investigation led to him being charged on June 29.

“I am innocent of these charges; they are false. The whole idea of sexual abuse is abhorrent to me,” he said in Rome last month.

Pell supporter Trevor Atkinson and several other members of his church burst into applause to support Pell as he walked into the court.

“We’re coming here open-minded – we’d like to hear the facts,” Atkinson told The Associated Press. “It’s really a matter of giving him a fair go.”

Outside the court, demonstrator Julie Cameron of Melbourne held up a painting of Mary cradling an infant Jesus. The image, she said, was symbolic of the duty the church has to protect children.

“This is where the actual Catholic Church has to go through renewal – it has to acknowledge the crimes that were committed on children,” Cameron said.

“No cardinal in the modern era, in a free society, has ever had criminal offences levelled against him,” she said.

“And this is not just any cardinal; this is the Vatican number three, this is a career priest, at the climax of his career, who has been hand-picked by Pope Francis to go to the Vatican to clean up and bring order and transparency to the Medieval structure of the Vatican finances.”

Despite being unofficially considered the number three in the Vatican hierarchy, no special arrangements were in place at the court. He entered the building through the front door and was screened by security.

The pre-eminent cleric has been granted a leave of absence by the Pope, who has made clear the cardinal would not be forced to resign his post as head of the Vatican’s powerful economic ministry.

In testimony to an Australian government-backed inquiry into child abuse last year, Pell said the Catholic Church had made “catastrophic” choices by refusing to believe abused children, shuffling abusive priests from parish to parish, and relying too heavily on the counsel of priests to solve the problem.

But for years, Pell had faced allegations that he mishandled cases of clergy abuse when he served as archbishop of Melbourne and, later, Sydney.

Pell appeared before the commission three times, once in person and twice via videolink from Rome. In one hearing, he admitted that he “mucked up” in dealing with paedophile priests in Victoria state in the 1970s.

More recently, Pell became the focus of a clergy sex abuse investigation, with Victoria detectives flying to the Vatican to interview him last year.

Pell is free in the run-up to his court hearing, during which he may formally apply for bail.

“There are questions over whether Pope Francis can leave [Pell’s] important position open for so long if this case in Australia goes on for years,” said Al Jazeera’s Yaara Bou Melhem.

“So it does seem that his career at the Vatican would be over.” 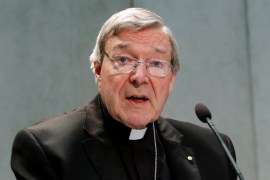 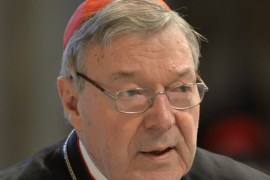