A Philippines politician said residents fleeing besieged Marawi City have seen about 100 dead bodies in an area where the army and ISIL-linked fighters have clashed in the past three weeks.

Zia Alonto Adiong, a local politician who is helping with relief efforts in Marawi, told reporters on Thursday that 500-1,000 people were still trapped in the city on the southern island of Mindanao.

“Dead bodies, at least 100, are scattered around the encounter area,” Adiong said.

Volunteers have been trying to extricate hundreds of civilians caught in the crossfire via “peace corridors”, Adiong said, but many of those trapped were still opting to hide rather than risk being discovered by the fighters.

Most residents, however, have run out of food and water, Adiong added.

Al Jazeera correspondent Jamela Alindogan said residents who initially fled and wanted to return to the city were being stopped by military forces.

“Martial law is being imposed here and across the entire island of Mindanao. Anyone is subject to investigation, even children,” Alindogan said.

The black flags of the Islamic State of Iraq and the Levant (ISIL, also known as ISIS) were flying over several government buildings in Marawi City, she added.

“I’ve lived here since I was 12,” said Elvira Sacot, who was forced to flee Marawi. “It hurts me to leave everything behind. But it is more painful to stay. I don’t think I’m coming back.”

Meanwhile, a senior member of the ISIL-linked group was arrested by the military near the coastal city of Cagayan de Oro, some 100km north of Marawi.

According to military spokesperson Jo-Ar Herrera, one of the seven Maute brothers, Mohammad Noaim Maute, was arrested at a checkpoint just after dawn.

The Maute group, led by two of Mohammad’s brothers, has been at the forefront of the vicious battle with security forces for Marawi City since May 23.

Mohammad, an Arabic language teacher, is the suspected bomb-maker for the group. He was holding a fake student card of the Marawi-based Mindanao State University when stopped at a checkpoint.

Most of the Maute brothers are believed to be in Marawi. Their parents have been taken into custody last week in separate cities.

The military said 290 people had died in over three weeks of fighting, including 206 fighters, 58 soldiers and 26 civilians.

The city of 200,000 has been largely abandoned owing to the fighting, which has seen the military relentlessly bomb areas held by the fighters, with residents fleeing to nearby towns. 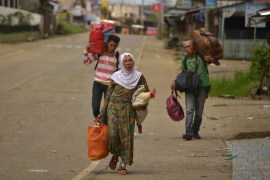 Hundreds of civilians still trapped in Marawi as heavy battles between Philippine forces and ISIL-linked fighters go on.