A prominent UAE lawyer sentenced to 10 years in 2013 for plotting against the government was on Saturday awarded a major human rights award.

Mohammed al-Roken was among 69 people jailed on charges of conspiring to overthrow the government of the United Arab Emirates following a mass trial criticised by rights groups.

A former head of the UAE Jurists’ Association, Roken, 54, was arrested in July 2012, after taking on the defence of several government opponents.

The prize jury lamented that Roken’s trial had gone ahead behind closed doors and demanded his immediate release.

Amnesty International’s Middle East and North Africa deputy director at the time staunchly criticised both the proceedings and the verdicts.

“Not only do the defendants appear to have been targeted simply because of their views, but they have been convicted on bogus charges and denied the basic right to a fair trial,” said Hassiba Hadj Sahraoui.

“The only thing this trial shows is the fundamental flaws in the UAE justice system,” she added.

According to Amnesty, the trial “was marred by allegations of torture which were blatantly ignored, the rights of defence were flaunted, and independent observers were banned from the court room”.

The annual award, which is worth 20,000 euros ($22,000), recognises lawyers of any nationality who have sought to defend human rights, often at great risk to themselves.

The Luxembourg-instigated European Bar Human Rights Institute, made the award, named after Trarieux, who in 1898 founded France’s Human Rights League. 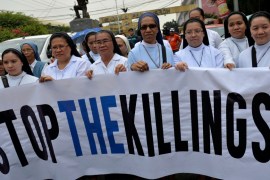 Who should stand up for human rights?

Amnesty International says the world has become a darker place, with a rise in ‘divisive and dangerous’ politics.