A statue depicting a goddess of justice has been removed from outside the Supreme Court in Bangladesh’s capital, Dhaka, following months of protests by conservative religious groups who had deemed it “un-Islamic”.

The statue of the blindfolded, sari-clad woman holding scales – a Bangladeshi version of the Greek goddess of justice, Themis – was taken down amid tight security in the early hours of Friday.

There was no official comment from the court or the government, but Attorney General Mahbubey Alam said the statue’s removal was “a decision of the court”.

He added that the statue had been moved to another place within the court premises.

Sculptor Mrinal Haque choked back tears as he oversaw the statue’s removal, saying it felt like “clearing a dead body”.

“Even my mother’s death did not make me so grief-stricken,” Haque told the AFP news agency.

Later on Friday, hundreds of students and left-wing activists protested against the statue’s removal outside the court premises and on the Dhaka University.

“It is a betrayal of the people. The depressing thing is that the government is using it as a political tool,” activist Imran Sarkar told AFP.

Hefazat-e-Islam and Bangladesh Olama League were among the groups who had been calling for the statue’s removal since its installation in December 2016, with thousands turning at demonstrations in front of the main mosque in the capital.

“I don’t like it myself,” Hasina said at the time, calling the statue “ridiculous”.

Haque rejected that claim, saying: “It is a piece of sculpture of a Bengali woman wearing a traditional sari, blouse, petticoat and bangles.”

Azizul Hoque Islamabadi, a spokesman for Hefazat-e-Islam, thanked Hasina on Friday, saying she “has prevented the country from a destabilising and confrontational situation”.

Dozens of atheists, liberal writers, bloggers and publishers and members of minority communities and foreigners have been targeted and killed.

In 2008, protests led to the removal of a statue of a Bangladeshi mystic poet at a road crossing near Dhaka’s airport. 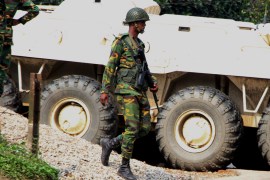 Fighters blow themselves up with grenade in Bangladesh

Police come under grenade attack during a raid near the capital as violence continues to hit the South Asian nation. 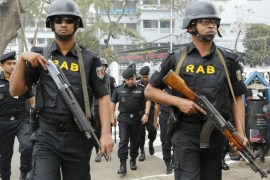