Britain’s threat level has been raised from “severe” to “critical”, Prime Minister Theresa May has announced, saying another attack “may be imminent” following a deadly suicide bombing in Manchester.

May made the announcement in a televised address late on Tuesday, warning her government cannot ignore the possibility that there is “a wider group of individuals linked to this attack”.

An improvised explosive device went off late on Monday as thousands of mostly young fans streamed out of Manchester Arena in the northern English city at the end of US artist Ariana Grande‘s performance.

On Tuesday, police said Salman Abedi, 22, had carried out the suicide bombing that killed 23 people, including himself.

About 5,000 British soldiers will patrol the streets and boost security at key sites, and military personnel will be deployed at public events such as concerts and sports events.

“Military officers will take over guarding duties at some of our key fixed locations,” said Mark Rowley from the Metropolitan Police. “It’s an extraordinary stance but it’s very well practiced. It’s all about protecting the public.”

Earlier on Tuesday, Ian Hopkins of the Greater Manchester Police confirmed the identity of the attacker but gave no further details. He also said police had raided two residential areas in Manchester, and carried out a controlled explosion at one as part of the investigation.

At one of the scenes where police raided an apartment, heavily armed men were guarding what one resident described as a “very, very quiet” area. Plain-clothed officers wearing gloves removed bags from the apartment.

The area in south Manchester, home to a number of tidy-looking buildings, is less than a kilometre from the supermarket where police reportedly arrested a 23-year-old man in connection with the attack.

Al Jazeera’s Barnaby Phillips, reporting from Manchester, said it appeared the assault was carried out with “more planning and more sophistication”, in comparison with the attack on parliament in London in March.

Islamic State of Iraq and the Levant (ISIL) claimed responsibility on its social media channels, saying “one of the caliphate’s soldiers placed bombs among the crowds”.

At least one of the fatalities was an eight-year-old girl, he said.

Earlier in the day, May denounced the “callous terrorist attack” that she labelled as “among the worst terrorism we have experienced in the United Kingdom”.

Queen Elizabeth described the bombing as an “act of barbarity”.

Martin Reardon, a security analyst and former FBI agent, said that as ISIL loses ground in the Middle East, fighters are likely to stage more attacks in Europe.The bombing also came in the lead-up to a June 8 general election in the UK.

Al Jazeera’s Shafik Mandhai, reporting from Manchester, said the area near the train station and sports arena – the site of the attack – remained sealed off by police officers.

Later on Tuesday, thousands attended a vigil in Manchester’s Albert Square to honour the victims. 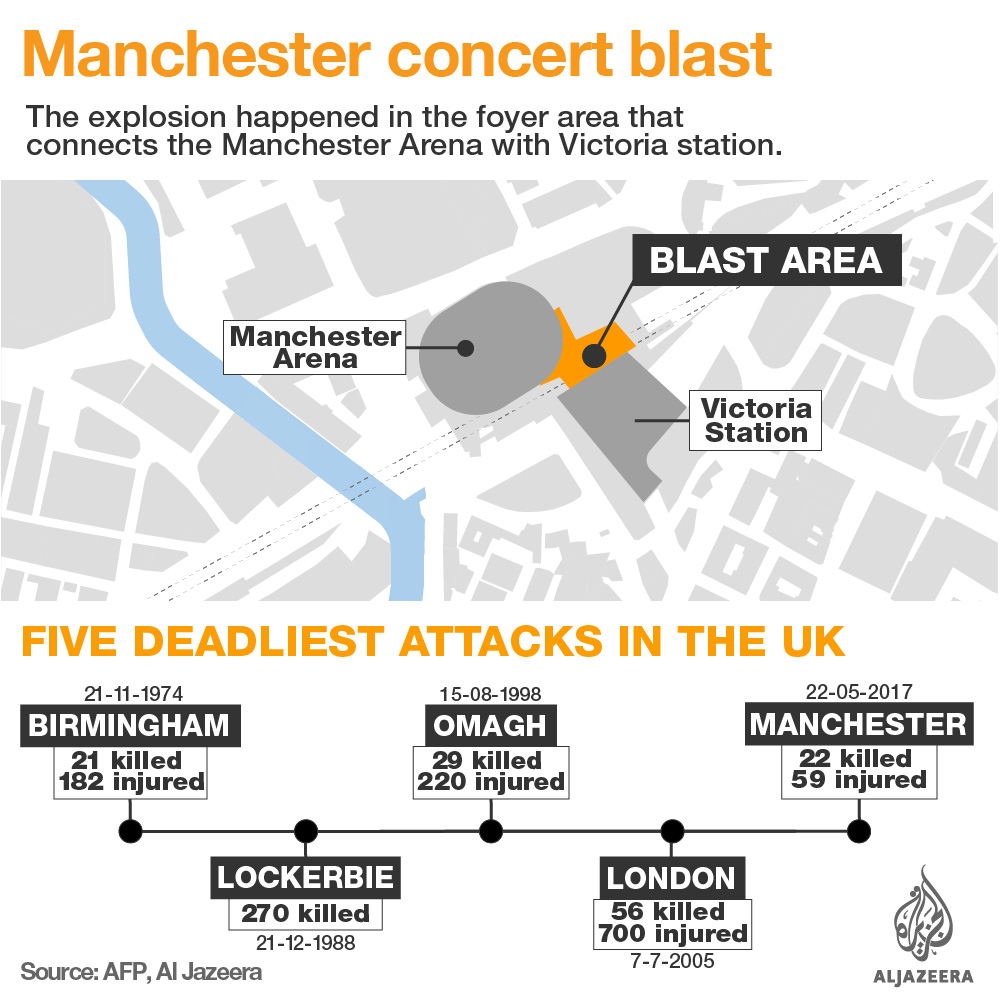