Venezuelans in cars and on motorcycles, bikes and horseback have clogged roads in the latest protests in more than a month of nationwide marches against President Nicolas Maduro.

Security forces used tear gas to disperse protesters on Saturday in the northern city of Valencia and soldiers blocked the procession from reaching its intended destination.

In the capital, Caracas, protesters hoped to fill 25km of road leading to the coastal state of Vargas.

The protests were the latest in more than a month of unrest sparked by the country’s deepening political and economic crisis.

“You have to keep finding ways to protest,” Rafael Galvis, 46, told AFP news agency as he drove a truck carrying a dozen protesters waving the red, blue and yellow Venezuelan flag and banners with slogans criticising Maduro.

“We are going to stay in the street, building a way out of the crisis,” opposition politician Freddy Guevara said at Saturday’s Caracas rally.

In the central state of Cojedes, groups of people riding horses joined the procession of protest.

Government supporters also rallied in downtown Caracas on Saturday to support the president.

Tens of thousands of protesters have turned out for near-daily protests in the country for weeks, seeking to remove Maduro and put an end to a devastating economic crisis that has caused widespread food and medicine shortages.

The unrest has killed at least 38 people since early April, including protesters, government sympathisers, bystanders and security forces. Hundreds have also been hurt or arrested.

Al Jazeera’s John Holman, reporting from the Colombian city of Cucuta on the Venezuelan border, said the situation is becoming “increasingly desperate” in Venezuela.

“There is really a central issue here: President Maduro and his party trying to cling to power and strengthen their hold on power in a way the opposition parties say is illegal,” Holman said.

THE LISTENING POST: Protests, propaganda and self-censorship in Venezuela

Elected in 2013, Maduro, the hand-picked successor of the late longtime leftist firebrand Hugo Chavez, is resisting pressure for an early vote, calling the crisis the result of a US-backed capitalist conspiracy.

Maduro’s opponents have branded him a dictator.

Protesters also oppose his plans to elect an assembly to overhaul the constitution, dismissing it as a way to put off elections. 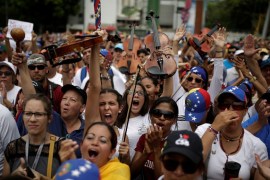 The opposition turns down Maduro’s invitation to discuss new constitution and vows to continue protests for elections. 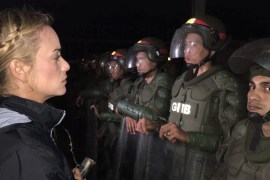 Can President Nicolas Maduro’s drive to rewrite the constitution be stopped?