Colombia’s congress has approved a law ratifying provisions of a peace agreement that permits the country’s largest leftist guerrilla group, FARC, to participate in politics.

The senate voted 52-2 on Wednesday in favour of the law that provides for the “political reintegration” of the Revolutionary Armed Forces of Colombia (FARC).

The group’s inclusion as a legal political party was a key point of the peace agreement signed in November between President Juan Manuel Santos and the FARC.

The new law guarantees the former guerrillas a minimum of five seats in the senate, and five in the lower house of congress, although the group must run in legislative elections next year to claim them.

The FARC will formally become a political party at a convention of former guerrillas that is scheduled for August.

Disarming the rebels was supposed to be completed by the end of the month, but the process has been delayed by logistical and legal issues, according to the United Nations, which is overseeing the task.

Santos said on Monday that he expects the FARC’s nearly 7,000 fighters to hand over their weapons by the end of May, but he acknowledged that there are another 900 caches with explosives, munitions and spare parts that must still be dealt with.

The FARC’s disarmament will leave rival movement, the National Liberation Army (ELN), as the only rebel group still waging a multi-sided war that has killed 260,000 people.

Peace talks between the ELN and the government, which were launched in February, have been plagued with delays. Negotiations are set to resume this month.

Analysts warn that reaching an accord with the ELN may be more complicated than the FARC deal, which was the fruit of four years of negotiations in Cuba. 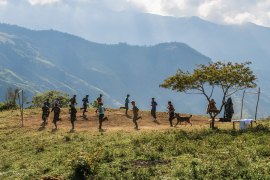 Demobilising with the FARC’s 18th Front

We follow one of the FARC’s most militarily successful fronts as it heads to a UN camp to begin the transition to peace. 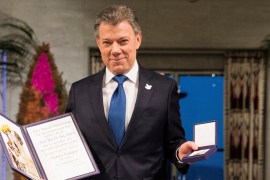 As Colombia’s president receives the 2016 Nobel Peace Prize, he discusses the FARC peace deal and challenges ahead.