US forces failed to take necessary precautions before launching a lethal drone strike in northern Syria last month that hit a mosque full of worshipers, three separate investigations have revealed.

But interviews with locals, coupled with photographs and video of the building, show it was a well known mosque in the village of al-Jinah that hosted lectures every Thursday evening, according to the investigation.

Researchers also allege that the US launched Hellfire missiles at civilians as they fled the mosque.

Ole Solvang, lead researcher on the HRW investigation, told Al Jazeera that: “US forces failed to take the necessary precautions to minimise civilian casualties. Based on statements from US military personnel, they didn’t know this was a mosque, which reflects poorly on their intel.”

HRW interviewed by phone 14 people with first-hand knowledge of the attack, including four who were in the mosque at the time of the attack.

In carrying out the investigation, HRW used research provided by Bellingcat, which analysed video footage and photographs from the attack, and Forensic Architecture, which created models of the mosque and a reconstruction of the attack.

The three organisations conducted “separate but complementary” investigations into the attack, said Solvang.

“Our analysis reveals that contrary to US statements, the building targeted was a functioning, recently built mosque containing a large prayer hall, several auxiliary functions and the Imam’s residence,” according to Forensic Architecture.

Witnesses told HRW that the attack began about an hour after the Maghrib (sunset) prayer and roughly 15 minutes before the Isha’a (night) prayer.

“Even if there were armed group members in the mosque, understanding the nature of the targeted building and the pattern of life around the building would be crucial to assess the risk to civilians and take necessary precautions to minimise civilian casualties,” HRW’s report said.

“Striking a mosque just before prayer and then attacking people attempting to flee the area without knowing whether they were civilians or combatants may well have been disproportionate and a violation of the laws of war even if there were armed group members in the mosque.”

Four witnesses that researchers at Human Rights Watch spoke with estimated there were 300 people attending a religious lecture at the mosque when the attack began.

After the drone destroyed the northern segments of the building with two 500lb bombs, worshipers who fled where then targeted with what researchers from Forensic Architecture and HRW identified as likely Hellfire missiles.

US forces often use “double tap” tactics when targeting al-Qaeda and the Islamic State in Iraq and the Levant (ISIL), and it would appear that they were operating on this premise in al-Jinah as well.

“We can’t say that they deliberately targeted civilians, but … nonetheless, they were civilians according to the information that we have,” said Solvang.

“People who attend the mosque and locals both said it was run by peaceful people, and first responders told us they did not find any weapons amidst the rubble.”

OPINION: Trump’s lack of strategy on Syria is dangerous

Pentagon spokesman Eric Pahon said at the time of the strike that US surveillance of the target area indicated evening prayers had concluded before the attack.

He said the building that was struck was a “partially constructed community meeting hall” that al-Qaeda leaders used to gather and “as a place to educate and indoctrinate al-Qaeda fighters”.

HRW has called for a full and transparent investigation into the attack, and has asked that all findings be released in as much detail as possible.

“When viewed in the context of increasing civilian casualties, both in Syria and Iraq … we are concerned that these are signs of less stringent procedure and verification of targets,” said Solvang.

The US is leading a coalition of nations in the fight against ISIL in both Syria and Iraq.

Coalition air strikes on Monday killed at least 13 civilians in the eastern Syrian province of Deir Az Zor, according to a UK-based monitor.

Last month, US strikes in neighbouring Iraq killed as many as 200 civilians in one day.

According to a recent report by Airwars, a group that monitors US-led coalition air strikes, March was the deadliest month yet in the coalition’s 32-month-long campaign in Iraq an Syria. 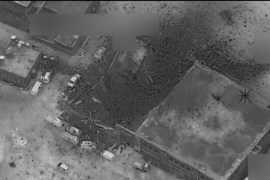 After reports of dozens of civilians killed, Pentagon releases picture of the site of a US raid in Aleppo province. 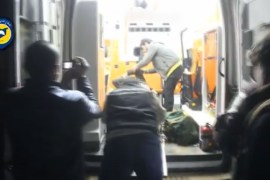