Poland on Thursday welcomed the first US troops in a multinational force being posted across the Baltic region to counter potential threats from Russia.

More than 1,100 soldiers – 900 US troops as well as 150 British and 120 Romanians – are to be deployed in Orzysz, about 57km south of Russia’s Baltic Sea enclave of Kaliningrad, where Moscow has stationed nuclear-capable missiles and an S-400 air missile defence system.

Three other formations are due to become operational by June across the region.

“Deploying of these troops to Poland is a clear demonstration of NATO’s unity and resolve and sends a clear message to any potential aggressor,” NATO Supreme Allied Commander Europe, General Curtis Scaparrotti, said at a welcoming ceremony for the first arrivals at Orzysz, 220km northeast of the capital, Warsaw.

Poland, alarmed by Russia’s assertiveness on NATO’s eastern flank, has lobbied hard for the stationing of NATO troops on its soil, especially since Moscow’s annexation of Crimea in 2014.

Russia vowed to take retaliatory measures in May 2016 if NATO deployed more battalions in Poland and the Baltic states, adding it would reinforce its western and southern flanks with new divisions.

OPINION: Is a Russia-NATO conflict in the making?

Moscow has reacted angrily to the alliance’s military presence in countries that were once part of the Soviet Union and to exercises close to its borders.

Russia said it would install S-400 surface-to-air missiles and nuclear-capable Iskander systems in the exclave of Kaliningrad, in retaliation for the NATO deployment of its so-called “defence shield” in Eastern Europe. 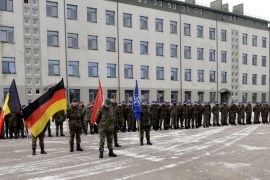 The Baltic states: No easy target

The Baltic states are again worried about Russia’s intentions, but this time they are ready to defend themselves. 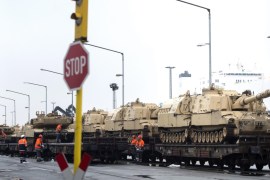 US troops in Poland ‘a threat to Russia’s security’