Canada bestowed the title on Yousafzai, 19, during a ceremony in Ottawa on Wednesday.

“I’m humbled to accept honorary citizenship of your country,” she said in the House of Commons, where she received several standing ovations from parliamentarians and members of the public that packed the gallery.

“While I will always be a proud Pashtun and a proud citizen of Pakistan, I’m grateful to be an honorary member of your nation of heroes,” Yousafzai said.

“Though I still require a visa, but that’s another discussion,” she added, with a laugh.

Yousafzai became the youngest person to win the Nobel Peace Prize in 2014 aged 17.

Earlier this week she was named a UN Messenger of Peace, the highest honour awarded by the United Nations, for her work on girls’ right to education worldwide.

Yousafzai first came to international prominence after a Taliban gunman shot her in the head near her school in Pakistan’s Swat Valley.

The attack was seen as retaliation for her outspoken opposition to the group blocking women and girls from getting an education.

“Malala, your story is an inspiration to us all,” said Justin Trudeau, Canada’s prime minister, during the ceremony, where he presented Yousafzai with a certificate of honorary citizenship and a Canadian flag.

“For bravely lending your voice to so many, we thank you. From this day forward, we are all proud to call you Canadian,” Trudeau said.

“So honoured to be standing with Malala Yousafzai to engage students on education and gender equality,” tweeted Maryam Monsef, Canada’s minister of status of women.

Michael Chong, an MP and Conservative Party leadership candidate, also welcomed her to Ottawa, describing Yousafzai as “a courageous example for women everywhere who face oppression simply because they are women”.

Canada’s previous Conservative government made the decision to bestow honorary citizenship on Yousafzai in 2014.

But the ceremony was cancelled because it coincided with a man opening fire on Parliament Hill in October 2014.

Yousafzai is only the sixth person to receive honorary Canadian citizenship.

The first was Raoul Wallenberg, a Swedish diplomat who saved thousands of Hungarian Jews during World War II. He was bestowed the title posthumously in 1985.

Honorary citizenship is entirely symbolic. It does not come with any rights or privileges, such as a Canadian passport or the right to vote in national elections. 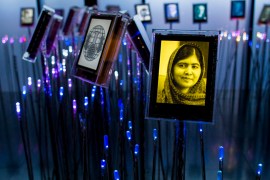