Toronto, Canada – Canada has said it will not boost its refugee intake in 2017, despite widespread calls for Ottawa to take action to counter US President Donald Trump’s executive order barring entry to refugees and immigrants from seven countries in the Middle East and Africa.

Canada plans to resettle 40,000 refugees and protected persons in the country this year, both through government support and private sponsorship.

“Our immigration levels plan has an allocation that is historically high for refugees,” said Immigration, Refugees and Citizenship Minister Ahmed Hussen earlier this week. “We intend to maintain that plan.”

But human rights groups and refugee advocates are calling on Canada to lift its cap on refugee sponsorship in 2017, especially in light of curbs to immigration south of the border.

Passed last Friday, Trump’s executive order blocks immigration from Iran, Iraq, Syria, Yemen, Libya, Sudan and Somalia for 90 days, suspends the US refugee programme for 120 days, and indefinitely bars Syrian refugees from being resettled until such a time that is “consistent with the national interest”.

The so-called “Muslim ban” has stranded travellers and visa- and green card-holders, and separated families.

“There’s obviously a very immediate and urgent concern that hundreds or even thousands of refugees have suddenly been left in the lurch, individuals who thought they were well on their way to being resettled in the United States,” said Alex Neve, secretary general of Amnesty International Canada.

“Canada is very well placed to step in and ensure that another avenue to safety opens,” Neve told Al Jazeera.

Over the weekend, as confusion reigned in airports around the world, Canadian Prime Minister Justin Trudeau was praised after he tweeted: “To those fleeing persecution, terror & war, Canadians will welcome you, regardless of your faith. Diversity is our strength #WelcomeToCanada”.

But Canada has already reached its cap of 1,000 new private sponsorship applications for Syrian and Iraqi refugees this year and the government does not plan to lift it.

Private sponsorship allows local organisations that hold agreements with the government to resettle refugees. These groups are responsible for the family’s needs during their first year in Canada.

The government said it would grant temporary resident visas to anyone with a valid US visa who was stranded in Canada as a result of the executive order.

And Hussen said Ottawa has “received assurances from the White House and other US authorities that Canadian citizens, Canadian dual citizens, and permanent residents with valid permanent resident cards continue to have access to the United States and are not affected” by Trump’s executive order.

But pressure is mounting on Ottawa to do more.

Among the calls for action, human rights groups are pushing Canada to lift the Safe Third Country Agreement. The agreement blocks asylum seekers who first land in the US from making an asylum application in Canada, save for a few exceptions, on the basis that the US is a “safe country” for refugees.

The Canadian Civil Liberties Association said the agreement should be suspended because it “does not consider the US at this current time to be a ‘safe third country'”.

But Hussen, the immigration minister, said this week that “the conditions of that agreement continue to be met”.

Meanwhile, the New Democratic Party called for an emergency debate in the House of Commons on Tuesday to discuss Canada’s response. The party has called on Ottawa to lift the Safe Third Country Agreement and the cap on refugee resettlement, and fast-track refugee applications from the US.

“There is no question that this ban promotes hate and intolerance. This ban will have a disastrous effect for thousands of innocent travellers and refugees,” said Jenny Kwan, a parliament member and the NDP’s immigration critic.

Canadians have also shown vocal opposition to the ban. Hundreds of people rallied in front of the US Consulate in downtown Toronto on Monday, chanting: “No hate, no fear, refugees are welcome here!”.

“Trump claims that we need an extreme vetting process, which is kind of a ridiculous statement to me, because the vetting process for refugees and green card holders is extremely rigorous to begin with,” said John Park, a US citizen who said he saw how difficult the process was for his wife to get a green card.

“To say that you need even more vetting is absolutely a red herring that Trump is appealing to peoples’ worst instincts. He is trying to make people think that refugees and foreigners are causing problems and that’s absolutely false.”

Anne Rubenstein, a history professor at York University in Toronto who took part in the protest, said she was “so outraged [she] can barely find the words”.

“As Jews, we understand that banning people from a country because of their race and religion never ends well,” Rubenstein told Al Jazeera.

“I hope we shut the consulate down here and I hope it stays shut down until they reverse this idiotic, appalling and illegal executive order. I’m disgusted, and I say that as a US citizen, as a Jew, and as a historian.” 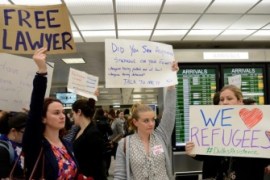 How will the US travel ban affect those in search of a new life? 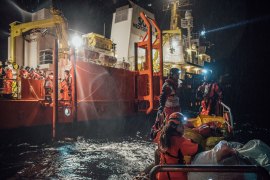 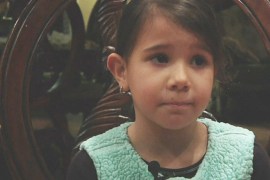